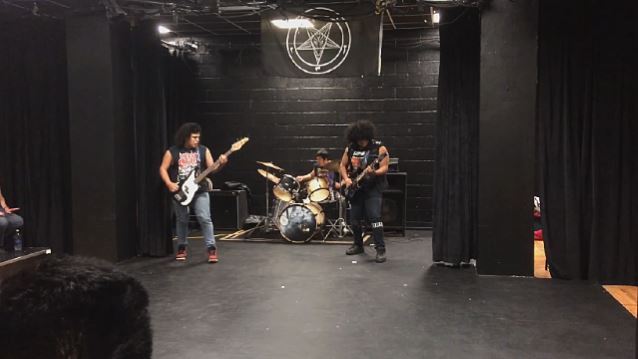 A performance by a three-piece heavy metal band kicked off a controversial Black Mass Sunday night (September 21) in downtown Oklahoma City, Oklahoma, drawing protests and prayer vigils from those who objected to the event.

The group's guitarist wore a "METAL CHURCH" shirt during the sold-out Mass, which saw a local satanist, Adam Daniels, perform a ritual. The event also reportedly featured a desecration of the Holy Eucharist, which Catholics believe to be the literal body of Christ, and a reverse exorcism, casting the Holy Spirit out of a person.

Only 42 people — roughly half of the total tickets sold — showed up for the Mass, which was protested by hundreds of Christian believers. In addition, nearly 300 Catholics from Wichita, Kansas as well as several more from Topeka, took buses to Oklahoma City to peacefully show their displeasure at the event.

"[It's] shocking to think that they worship the devil instead of God," protester Estefani Martinez told KFOR.com.

"For Catholics, it's the most grievous offense against God you can commit," said Francis Slobodnik, who drove in on a bus from Kansas for the event.

"We came down here to show our displeasure in a prayerful, peaceful way, to show our support for God and our faith and to stand up to Satan," added Slobodnik.

Anthony Leon, whose band was scheduled to perform at the Black Mass, said about the protesters: "I respect their right to do what they’re doing. So long as they leave us alone, we'll leave them alone."

"The Black Mass is really a mass celebrating death." Father Bill Pruett of St. James the Greater Catholic Church told Fox 25. "The devil is all about death and evil is about death."

"The actual occasion for this event today was to reaffirm our belief as Catholic Christians that Jesus Christ is alive and well just as he always has been," Pruett said.

A Civic Center spokesperson told Fox 25 that they allowed the service to be held in their building because the Civic Center is a public-use facility.

"We cannot deny rental to any one group based upon the content of their message, even if that message is objectionable to other people," Jennifer McClintock, OKC Civic Center Public Information Manager, said.

Watch footage of Sunday's Black Mass and protest below.