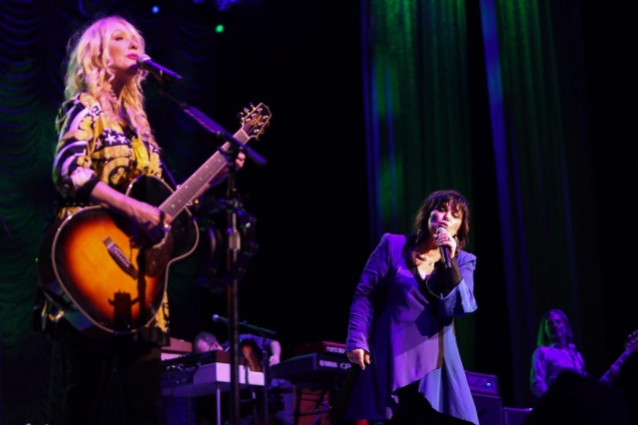 With the "Love Alive" tour hitting Ann and Nancy Wilson's Washington-area hometown tonight, the HEART founders and tourmate Elle King chatted about the summer tour in the video below. The critically acclaimed trek, which kicked off July 9 and wraps October 13, marks the band's first tour in three years.

Produced by Live Nation, the massive trek by the trend-setting, multiple-platinum Rock And Roll Hall Of Fame legends includes a stellar lineup, with JOAN JETT & THE BLACKHEARTS joining the majority of shows. HEART has partnered with Reverb for this tour to reduce the environmental footprint of the events while also engaging fans in local and national causes each night in the concourse.

During an appearance on the "Let There Be Talk" podcast, Nancy spoke about the incident which caused HEART to go on a kind of hiatus for the past three years. "There was a family drama that was highly uncalled for and unnecessary and hurtful, and it was just one of those things that takes time to get past," she said. "So, a couple of years have gone by. It's not anything that Ann ever did wrong, or I ever did wrong, but it's just one of those family dramas that just happened, and it just kind of poisoned the atmosphere for a while there. So it's good. I've had a real positive feeling about now that I'm communicating directly more with Ann."