Commented Thornell: "Goddammit, I guess we all began to doubt whether there'd be a new album or not. There's been so much trouble during the way with a computer crash on the top of it all. Anyway, we're finally there. Last weekend it was time for Johan to take a trip to Stockholm to enter The Black Chapel Studio and scream his lungs out. Well, I screamed pretty much myself too. Nice to finally do some growling again. Don't think I screamed a word on the last album so it sure was about time. Mattias [Ljung] also did the last guitar solo recording and also recorded some acoustic guitar.

"So what's next then? It's time for Dan Swanö to take care of the recording and mix the stuff in his Unisound Studio. We're totally excited to hear the final version of the album. Swanö always does great jobs and I'm totally convinced that's what he'll do this time too."

HEARSE's fourth album, "In These Veins", was released in North America on September 18, 2007 via Candlelight Records. The follow-up to 2005's "The Last Ordeal" was recorded and mixed by Dan Swanö (EDGE OF SANITY, BLOODBATH).

Formed by longtime friends Thornell and Liiva, HEARSE recorded a demo before signing with Hammerheart Records. The band released a limited-edition 7-inch single, entitled "Torch", prior to issuing their debut album, "Dominion Reptillian", in 2003. A follow-up effort, "Armageddon Mon Amour", came out in 2004. The group's third CD, "The Last Ordeal", was released in August 2005 through Holland's Karmageddon Media. 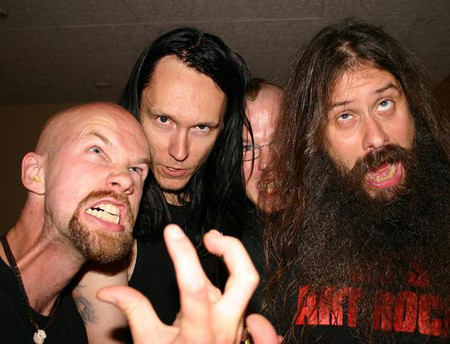