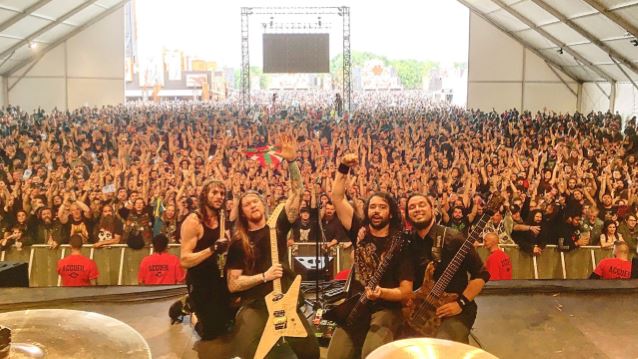 Denver, Colorado thrashers HAVOK claim to have been removed from the billing of the upcoming MEGADETH tour with AMON AMARTH, SUICIDAL TENDENCIES and METAL CHURCH after they were "offered an unacceptable management contract" from Mustaine Management, headed up by Justis Mustaine, the 24-year-old son of MEGADETH mainman Dave Mustaine.

HAVOK guitarist/vocalist David Sanchez said in a statement: "It is with deep regret we are forced to inform fans of metal that we will not be on the upcoming MEGADETH tour with AMON AMARTH, SUICIDAL TENDENCIES and METAL CHURCH. We will also not be going to Mexico in August and early September as was planned.

"We were really looking forward to these shows, but, unfortunately, Mr. Mustaine has chosen to remove us from the lineup. The reasons for our absence are directly related to a contract negotiation insisted upon by Mustaine Management — a negotiation that has gone awry. We are authorized to say that we were offered an unacceptable management contract from Mustaine Management, which we declined.

"We cannot disclose more details at this time (at our attorney's directive), but nonetheless, would like to thank Mustaine Management for the past opportunities that they brought to the table while working with us. We would also like to apologize to the fans that will not be able to see us this fall — we will sorely miss all of you. New tour dates will be announced soon and we look forward to getting back on the road to headbang with the best fans in the world."

HAVOK is working on its fourth studio album, to be released this winter via Century Media Records.

That's untrue. @metalsucks don't have a clue, David Sanchez is lying if that's what he said. https://t.co/xCIMU4pa55

Call my mgmt. and if your not one of the gossip sites that slags me constantly maybe I'll talk to you. @5Bartistmgmt https://t.co/u662lt3lVf