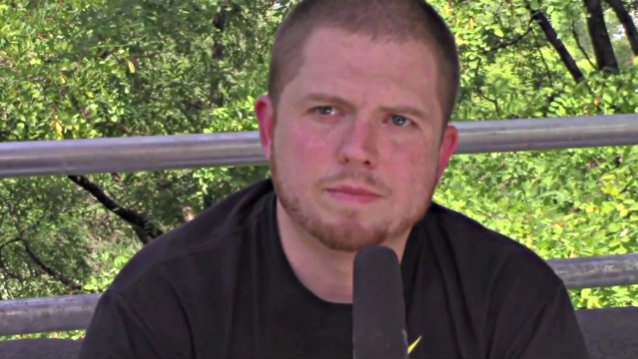 Metalship conducted an interview with vocalist Jamey Jasta of Connecticut hardcore/metal masters HATEBREED at last month's Heavy Montreal festival in Montreal, Quebec, Canada. You can now watch the chat below. A couple of excerpts from the interview follow (transcribed by BLABBERMOUTH.NET).

Jamey: "If you look at a band like the RAMONES or you look at a band like NIRVANA, I would try to make HATEBREED kind of like that in the sense where it's just back to basics. I want HATEBREED to kind of be the RAMONES of heavy music. We're not the most handsome band, we're not the most marketable band, but our songs are memorable. Everybody knows our name and our logo and at least a couple of songs. Even people that hate us, they know 'Live For This', they know 'Destroy Everything', they know 'I Will Be Heard'. People that hate the band, they know about us, they know our logo. We're a world-travelling band, we're a global band. So I say, don't fuck with the formula, keep it how it is. We've been doing this for 20 years, and regardless of the reviews of the critics, or whatever, the formula's there, it works. People enjoy it and people love singing along."

On metal being a male-dominated world:

Jamey: "That's a misconception. Actually, this last tour in Europe and the tour we did right prior to that tour, we outsold guy shirts with girl shirts. I think it's a misconception because of the late '90s, it was so male dominated. But I would say from 2002, 2003 onward, there's a lot… I mean, we've toured with bands with female members as well — everybody from FIGURE FOUR to OTEP to ARCH ENEMY to KITTIE to… I mean, there's countless bands. I think it's just a more welcoming thing. I think women gravitate towards metal and harder music now because it's not just boys' fun anymore and people are more open-minded and it's not as, I guess, threatening as it once was. Actually, I think it's more threatening at, like, a Dave Matthews concert. I remember there was a security guy that told me, 'We had more girls that were groped and fighting other girls and being assaulted at a Dave Matthews concert than we did at Mayhem fest.' So there you go. But if you were a 13-year-old girl and you were into Justin Bieber and you saw a mosh pit, you might think that it's threatening. But that's why you talk about it and you speak out and you say… Like, I have 'Beliebers' on my Twitter, believe it or not — I get followed by 'Beliebers' all the time — and then they go, 'You're the first metal band I ever checked out. ' And then they learn about other bands. So from the outside it might look threatening, but it isn't."

HATEBREED's latest album, "The Divinity Of Purpose", sold 17,000 copies in the United States in its first week of release to land at position No. 20 on The Billboard 200 chart. The CD was co-produced by HATEBREED, Chris "Zeuss" Harris (SUICIDE SILENCE, ALL THAT REMAINS, SHADOWS FALL) and Josh Wilbur (LAMB OF GOD, AVENGED SEVENFOLD), with Wilbur also handling mixing duties. The cover artwork was created and illustrated by Eliran Kantor (TESTAMENT, ATHEIST, SIGH, ANACRUSIS, GWAR).