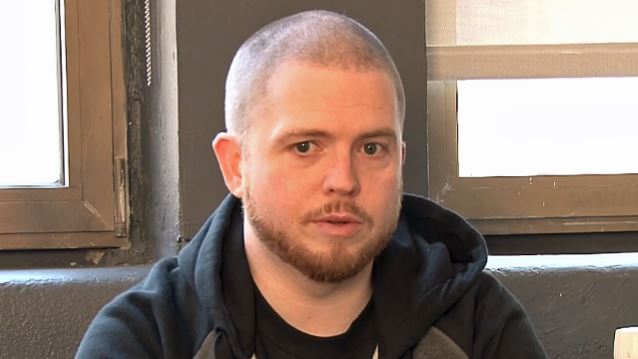 HATEBREED frontman Jamey Jasta has commented on reports that Ozzy Osbourne may have cheated on his wife Sharon with a celebrity hairstylist.

The BLACK SABBATH singer's relationship with his alleged mistress is rumored to have led to the Osbournes splitting after 33 years of marriage.

Ozzy was reportedly seeing the 45-year-old celebrity hairstylist for at least six months in addition to rumored encounters with at least two other women.

During an appearance on "The MetalSucks Podcast", Jasta addressed the Ozzy infidelity rumors, saying: "Having a relationship in the music industry is a hard thing to do. And even at the smallest level [for a musician] — and I don't mean this to come off in a bad way — but there are women that will go to crazy lengths to get what they want. And so you could be the most faithful guy, you could be the most honorable guy, but it's everywhere you turn. And even at my small level, I mean, it's… every day you could walk off the [tour] bus and it's on, if you wanted it to be. So it's very hard. I see it from both standpoints."

Jasta, who most recently shared the stage with Ozzy and Sharon at the May 12 press conference in Hollywood, California to announce Ozzfest Meets Knotfest, went on to describe the attention that he receives from women as the lead singer of a popular and well-known hardcore/metal band. He said: "It's crazy. It's not as crazy as it was when I was on TV [hosting MTV's 'Headbangers Ball'], but it's pretty… If I could publish… I mean, dude, in the MySpace days, the things… When you're on TV, for whatever reason, there's this, like… It just makes women… I mean, actors… I can't even imagine what it's like with actual famous people."

He continued: "I made the mistake of once showing my Facebook messages and my Instagram messages… Even in the MySpace days, I made the mistake… Even when you show it to a dude who you think is gonna be, like, 'Wow! That's cool. You're the man,' it's not really the best reaction. It's, like,'Really? That's what's going on?' I had a dude who was really, like, just completely blown away. 'I can't believe women behave like this.' It was the guitar player of another band who was just really… just bummed. [Laughs] And there's no way to talk about it without coming off like a douchebag, but it's funny that, with technology, people are more reachable than ever. So there's go-getters out there."

Jamey concluded by admitting that he doesn't "know anything about [the Osbournes'] situation." But he added that "it seems like this [hairstylist] lady was trying to take advantage of Ozzy."

Sharon, who has said she will continue to manage Ozzy's career, addressed the trouble in her marriage during a May 10 appearance on "The Talk", saying: "I don't know where I am going, who I'm going with and I just need time to think and really think about myself and what I really want for the rest of my life."

She admitted that she kicked Ozzy out of their Beverly Hills home, although he has since returned.