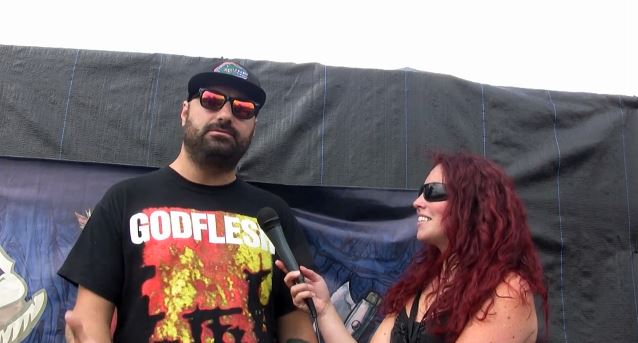 Felicity Hall of GetYourRockOut conducted an interview with guitarist Frank Novinec of Connecticut hardcore/metal masters HATEBREED at this year's edition of the Bloodstock Open Air festival, which was held August 7-10 at Catton Hall, Walton-On-Trent, West Midlands, United Kingdom. You can now watch the chat below.

In a recent interview with Finland's Kaaos TV, HATEBREED frontman Jamey Jasta was asked if the band was happy with the job its record labels (Nuclear Blast in Europe and Razor & Tie in the U.S.) did with HATEBREED's latest album, "The Divinity Of Purpose". "When the checks clear, I'm happy, because we get the budget, and the budget calls for a bad-ass record, and we've gotta do our job," Jasta said. "And we do our job every time; we deliver.

"With Nuclear Blast in Europe, we charted in a lot of places that we didn't chart before, and the press was great; they did a great job with the press. And they worked the record; they're still working the record. We even talked abut recently doing another video. So, yeah, I would say we're pretty happy. And then in the States, Razor & Tie was OK. I don't really have anything bad to say about them because they're just like any other record label — they're a business, and they've gotta make money selling records.

"I think we'll figure out what we'll do in America for the next record. I would do another record with [Razor & Tie], but if we're not contractually obligated to do it, let's see who is going to get in the mix and who wants to do it. I know there's always a record label interested in putting out HATEBREED, 'cause we've been consistent. We're not one of those bands that relies on the label. We're gonna sell records anywhere we go, and our fans are diehard; they're gonna support us."