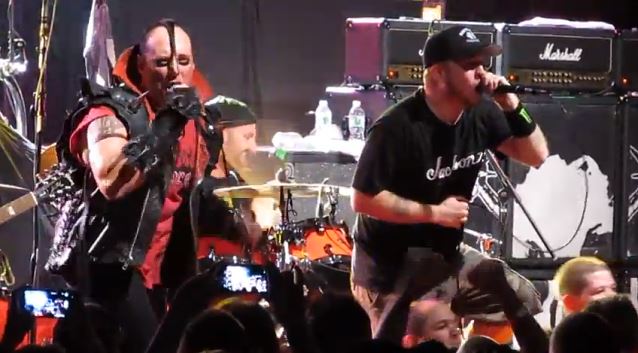 MISFITS' Jerry Only joined HATEBREED on stage last night (Sunday, September 15) at the Starland Ballroom in Sayreville, New Jersey to perform the MISFITS classic "Hatebreeders". Fan-filmed video footage of his appearance can be seen below.

HATEBREED's cover version of "Hatebreeders" song was included on the Connecticut hardcore/metal masters' covers album, entitled "For The Lions", which sold around 10,000 copies in the United States in its first week of release to debut at position No. 58 on The Billboard 200 chart.

Released in the U.S. in May 2009 via E1 Music "For The Lions" contained songs that were carefully selected by HATEBREED to represent a panoramic view of some of their favorite artists and greatest musical inspirations. Having completed the album in 2008, the band felt their work wasn't done yet and just returned to the studio with original guitar player Wayne Lozinak to record additional tracks for the album.

HATEBREED's new album, "The Divinity Of Purpose", sold 17,000 copies in the United States in its first week of release to land at position No. 20 on The Billboard 200 chart. The CD was made available on January 29 in North America via Razor & Tie and on January 25 in Europe through Nuclear Blast. The CD was co-produced by HATEBREED, Chris "Zeuss" Harris (SUICIDE SILENCE, ALL THAT REMAINS, SHADOWS FALL) and Josh Wilbur (LAMB OF GOD, AVENGED SEVENFOLD), with Wilbur also handling mixing duties. The cover artwork was created and illustrated by Eliran Kantor (TESTAMENT, ATHEIST, SIGH, ANACRUSIS, GWAR).