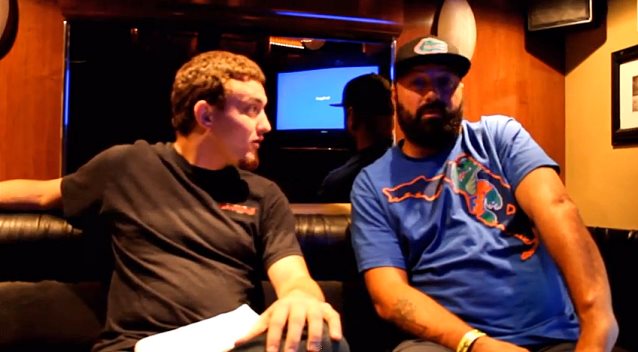 On September 12, The Front Row Report conducted an interview with guitarist Frank Novinec of Connecticut hardcore/metal masters HATEBREED at The Vogue Theatre in Indianapolis, Indiana. You can now watch the chat below.

HATEBREED's new album, "The Divinity Of Purpose", sold 17,000 copies in the United States in its first week of release to land at position No. 20 on The Billboard 200 chart. The CD was made available on January 29 in North America via Razor & Tie and on January 25 in Europe through Nuclear Blast. The CD was co-produced by HATEBREED, Chris "Zeuss" Harris (SUICIDE SILENCE, ALL THAT REMAINS, SHADOWS FALL) and Josh Wilbur (LAMB OF GOD, AVENGED SEVENFOLD), with Wilbur also handling mixing duties. The cover artwork was created and illustrated by Eliran Kantor (TESTAMENT, ATHEIST, SIGH, ANACRUSIS, GWAR) .

In a recent interview with PureGrainAudio.com, Novinec stated about the musical direction of "The Divinity Of Purpose": "We are a universal band like MOTÖRHEAD, where we appeal to rock, metal and hardcore fans, and we feel that we can step outside of our boundaries at times. We did that about as much as we wanted to on the last record and some people were into it and some people weren't, but there were some great songs in there. I think, definitely, for this one, we wanted it more straightforward; more meat and potatoes. We are a band that has been around for a long time and it is really difficult to come up with something fresh, but I think we achieved that on 'The Divinity Of Purpose'. More than anything, though, I am really proud at what a solid effort this record is from the beginning to the end."

Regarding the cover artwork for "The Divinity Of Purpose", Novinec said: "We had an artist who has done stuff for SODOM and TESTAMENT and others do this one for us. It was kind of a risk, because a lot of people thought, once they saw the cover, that the album was going to be really, really metal, and that is not the case at all. We wanted something different. We are open to different things and experimenting, and we certainly did that with this album cover, but when you look at it, it has the black-and-red classic HATEBREED look to it even though it is something new to us with the painting. I think it is real cool. This is an exciting time for us; everything from having a new album out, being on tour and the artwork."