Connecticut hardcore/metal masters HATEBREED have announced a new slate of U.S. headline tour dates for 2020. They will hit the road with AFTER THE BURIAL, HAVOK and CREEPING DEATH in May. Tickets for the "Monsters Of Mosh" trek go on sale Friday, March 6 at 10 a.m. local time. HATEBREED will also embark on a tour of the U.S. and Canada in late summer, supporting PARKWAY DRIVE.

HATEBREED on tour with AFTER THE BURIAL, HAVOK and CREEPING DEATH:

# No AFTER THE BURIAL, CREEPING DEATH
@ With BATTLECROSS

"This is just a taste of what's to come and we're definitely going hard on this one," said frontman Jamey Jasta. "The speed, intensity, and brutality that people have come to expect from us is on full display. Can't wait to play this one live and see the pit erupt."

At just under three minutes, "When The Blade Drops" is an absolute ripper that reaffirms the Grammy Award-nominated quintet's status as one of the most relevant and impactful acts in hard rock and heavy metal. This standalone single also heralds the start of a new chapter in HATEBREED's history that is guaranteed to be marked by the same ruthless breakdowns, pit-stirring anthems, and poignant lyrics that have made them one of heavy music's most unshakable institutions. "When the Blade Drops" effectively crystallizes the energy and fury of HATEBREED's legendary live gigs into a sharper-than-a-guillotine anthem.

The anthemic track is a special treat for fans as HATEBREED finish their new album, due out later this year. While "When The Blade Drops" won't appear on the forthcoming album, it certainly sets the table for what's to come. Stay tuned for more details on HATEBREED's eighth studio album.

"When The Blade Drops" arrives hot on the heels of the sold-out anniversary shows that HATEBREED embarked on throughout 2019 and the unprecedented success of 2016's "The Concrete Confessional". Not only did the latter tally 42 million total Spotify streams, but single "Looking Down The Barrel Of Today" also clocked 25 million-plus Spotify streams. 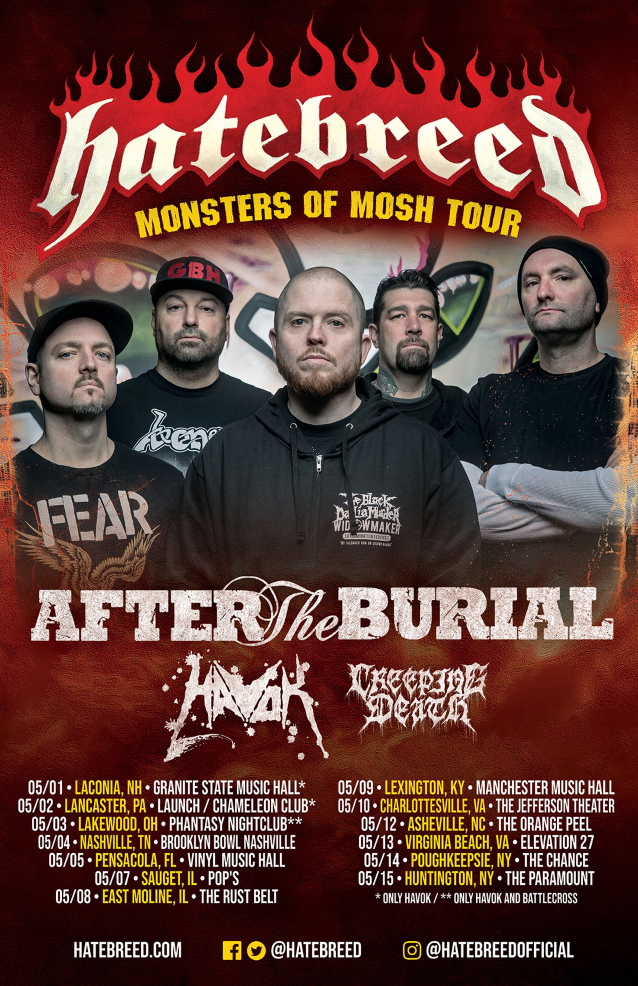