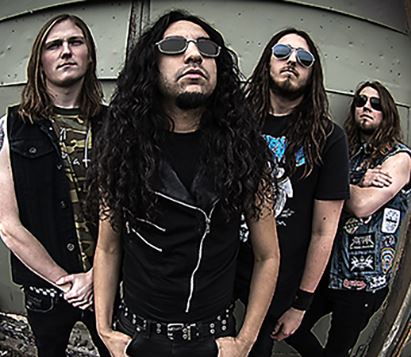 San Francisco Bay Area thrashers HATCHET have been working on the follow-up to 2013's acclaimed "Dawn Of The End" album (The End Records) since returning from last summer's tour with FLOTSAM AND JETSAM. The upcoming CD will debut the new HATCHET lineup behind founding member, vocalist and lead guitarist Julz Ramos: Clayton Cagle on guitar, Kody Barba on bass, and Ben Smith on drums. The new members have injected the band with a surge of raw energy, and fans of HATCHET will be satisfied with this revived enthusiasm laid into the recordings. Ramos says: "The faster, thrashier tracks hit harder than ever before, while the melodic stuff is catchier and we've even experimented with some heavier, slower tempos."

He continues: "Being in a touring band is not all fun and parties, and it takes a very special discipline. These guys all want to tour and have extensive road experience from their other projects. They have all shown great enthusiasm and commitment the past month with the recording of the new album, and despite the tight time frame, I was pleasantly surprised at how much everyone's contributions really made the songs shine and all of the new members' musical personalities are represented in the sound. I absolutely can't wait to release this album. This is going to be the strongest album yet!"