Welsh heavy rock power trio HARK has finished recording its forthcoming Season Of Mist debut, entitled "Crystalline". The album was tracked at Monnow Valley Studios (BLACK SABBATH, RUSH, JUDAS PRIEST, PORTISHEAD) in Wales, and mixed by CONVERGE guitarist Kurt Ballou (CONVERGE, HIGH ON FIRE, KVELERTAK, YOUNG WIDOWS), and will hit the stores on March 14 in Germany and the Benelux, March 17 in the rest of Europe, and March 18 in North America.

HARK has already released the "Mythopoeia" seven-inch single, which they managed to sell out on tours with RED FANG and CLUTCH.

HARK carries TAINT's torch forward, passed on from a legacy that began in 1994. With fresh chops and almighty riff power, HARK continues to fuse punk attack with SABBATHian dirge, and decorates post-whatever angularities with classic rock flourish. While Isaac's vocals expand on his tried and tested palette, his lyrics continue to shatter prose with bleak metaphor and acerbic spittle.

Made up of the former WHYTELEAF rhythm section Nikolai Ribnikov and Simon Bonwick, the HARK engine brings an OCD approach to song craft, and endlessly creative pummel. Their dynamic chops and blood lust for riffs meld with Isaac's honed and equally determined musical vision.

Regarding the recording of "Crystalline", mainman Jimbob Isaac stated: "Fingers to the bone. That has been one of our mottos since HARK's inception, and it carried us through to the recording studio. Long days, little sleep and grim determination made this record the beast that we believe it to be. We pushed ourselves in all kinds of ways, and that commitment resonates throughout. We're having fun biding our time, but there's only so long you can keep a bull in its pen." 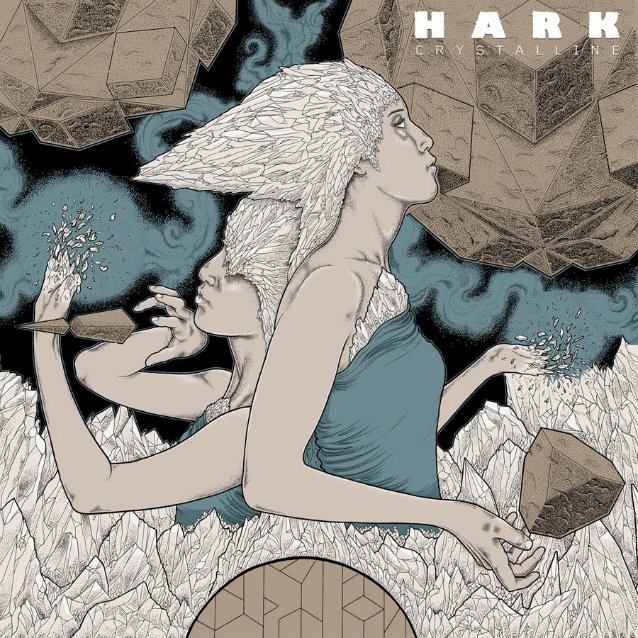