Frontiers Records has set an April 17 European release of the long-awaited new album from HARDLINE, entitled "Leaving the End Open".

HARDLINE was formed when brothers Johnny (vocals) and Joey Gioeli (guitar), originally from the band BRUNETTE, teamed up with guitarist Neal Schon (JOURNEY). Signed by MCA as soon as Schon left BAD ENGLISH, with the addition of Todd Jensen (DAVID LEE ROTH, ALICE COOPER) on bass and Deen Castronovo (also coming from BAD ENGLISH and later on with JOURNEY) on drums, the band went on to record its debut, "Double Eclipse", for MCA in 1992 and then toured with such heavy-hitters as VAN HALEN and MR. BIG.

While never popular in the mainstream, HARDLINE's album became a classic among the hard rock fraternity and is still today regarded as one of the finest efforts of the decade. However, by that time, grunge and alternative styles had already taken over and melodic rock was being pushed aside. Tension among band members, the record company and perhaps certain egos, got in the way of an immediate follow-up album, despite the band having written more than enough material.

Years later, Johnny (who in the meanwhile gathered vast recognition signing for the German axe hero Axel Rudi Pell) and his brother Joey decided to give it another go with HARDLINE after a call from Frontiers Records, and with an all new lineup, they produced the awesome return album, "II", in 2002, with Josh Ramos (of THE STORM and TWO FIRES fame) taking Neal Schon's place on lead guitar.

Hailed by critics and fans alike as a top-class return, the band returned on stage headlining the Gods Festival in Bradford in June 2002. Since then all band members worked on different projects. "Everyday life can sometimes step in and throw you off balance," says Johnny Gioeli. "This was the case for the big delay. I just had to put it aside and make sure I was ready for the task at hand. I'm not sure of where the future will bring me, hence the title 'Leaving the End Open'. I don't want to plan anymore, I just want to see where life takes me."

Johnny and Josh Ramos started to work on new HARDLINE songs in 2006. With a renewed line-up now featuring Johnny Gioeli on vocals and Josh Ramos on all guitars, with Michael T. Ross on keyboards, Jamie Brown on bass and Atma Anur on drums, HARDLINE is now back from where they have left off producing a killer new album, "Leaving The End Open", chock-full of killer guitar riffs, amazing hooklines and heartfelt ballad sealed with Gioeli's incredible vocals and the band's instrumental prowess.

"Today's worldwide economy has made it so difficult for artists to get out on the road and share the music with the fans," concludes Johnny. "Our fans do not go unnoticed... we will do everything possible to play shows and demonstrate the power this line up has."

The album will be released on May 19 in the USA via Frontiers/Super D and in Japan on King Records. 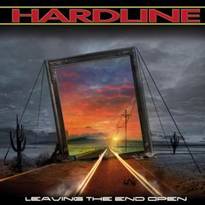