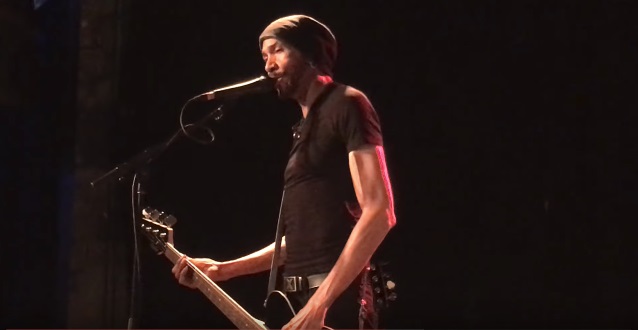 The dates being recorded begin April 19 in Scottsdale, Arizona and run through April 29 in San Juan Capistrano, California.

Since its earliest days, KING'S X has blended hard rock, progressive metal, soul, funk and blues into a ferocious mix that landed them on VH1's list of "100 Greatest Artists Of Hard Rock." The band, which consists of Doug Pinnick (bass/vocals), Jerry Gaskill (drums/vocals) and Ty Tabor (guitar/vocals), has released 15 studio albums and has toured with artists including AC/DC, PEARL JAM, DREAM THEATER, QUEENSRŸCHE, EXTREME, Steven Wilson and more.

"KING'S X has been a special band to me since their debut, 'Out Of The Silent Planet', and the incredibly unique experience of their live show is a major part of that," Jeff Zakim, VP of Business Development & Content Curation for VNUE, said. "Between the amazing audience participation, the inventiveness of their songs and the sheer energy exuded from the stage, a KING'S X live show is truly something special, and I can say with confidence that each attendee of these upcoming shows will want to take it home with them."

"I got my start in the music business in Houston, Texas, and was well aware of a little band in the Houston suburb Katy called KING'S X that truly rocked like no others," Zach Bair, CEO of VNUE and "instant music" pioneer DiscLive, said. "They remain at the top of their game, and the proof of that will lie in the recordings that emerge from these shows thanks to VNUE and set.fm. I couldn't be more excited to work with them."

"We can't wait to get on the road in the weeks ahead and give our fans a taste of the 'First Church of Rock & Roll,' and the show of their lifetimes," Doug Pinnick of KING'S X, said. "That our fans will be able to relive the show with a professional high-quality recording makes it so much more exhilarating, and we're so happy to be partnering with VNUE and set.fm on it."

Fans may pre-purchase the shows now by downloading the set.fm app from the Apple App Store or Google Play, or by going to this location. Additionally, fans can pre-purchase a Limited Edition VIP laminate which will include download codes for any two shows they choose by clicking here.