Dead Rhetoric: This [BLIND GUARDIAN's new all-orchestral album, "Twilight Orchestra: Legacy Of The Dark Lands"] was done for over a 20-year span. What sort of feeling does it finally coming out give you?

Hansi: "I'm relieved, and I'm just happy that we have come to the point where everyone involved — it's ready for people to listen to it. I'm overwhelmed still by the amount of work, but I'm more than just proud to have accomplished it and having the chance to give it to the people. That people will have a chance to listen to it — that's a relief! Over the years, we've been talking about that so many times. We've had to describe what it would sound like, and what it would be about, musically. I could literally see the question marks over the heads of people who never really understood what we were trying to say. If you haven't listened to it, it's very difficult to get an idea of what we are talking about. But once you have listened to it, you just figure, 'It makes sense, what the guys have spoken about for twenty years now.'"

Dead Rhetoric: There's obviously no metal band in the background but how do you feel that the "Twilight Orchestra" differs from the traditional BLIND GUARDIAN experience outside of that?

Hansi: "It does a lot of storytelling, and I believe that is what BLIND GUARDIAN is standing for as well. Now we have a combined conceptual album, but even if each BLIND GUARDIAN album isn't always a concept album, you still have these narrative aspects on each of them. This might be defined a little bit stronger on this album, but it shouldn't be different than what we have been doing since 'Nightfall In Middle Earth', at least. I believe the exploration of musical territories, not just because of using the classical instruments, but also in the way that we treated them — and sometimes abused them. They were supposed to do things that they would not normally do in a traditional orchestral arrangement. Some of them go into a metal direction, some go into a more jazzy direction and the orchestra had to play this in a classical way and capture these elements as well. That differs from what we do in BLIND GUARDIAN. Also, my singing might be a bit more elaborated in terms of dynamics and the way that I express myself. Other than that, it's certainly in the tradition of BLIND GUARDIAN."

Dead Rhetoric: So, do you feel that some of the songs could be translated in such a way that you could play them live with BLIND GUARDIAN?

Hansi: "Yes [laughs], that is very likely and very possible. We've had a few discussions about this during the creation process and production process. At the very end, we decided that the original intention was to be without using a metal band, but of course, we discussed using a metal band to make it more understandable for people to see what the album was about. But we didn't feel the necessity. The second step, after everyone had an idea about the original intention — it could be doable, but what we realized is that once we go into such a direction, the whole thing needs to be rearranged. We need to create space for the band, which means the orchestra as to take a step back. It also means that the orchestra has to be recorded again and rearranged. It would be very difficult, though it is doable. Though it's very unlikely that we are going to do this within the next two years. I'd rather see this as the beginning of another BLIND GUARDIAN experience, and we will bring this to the stage at a later time. For now, we have just released the album and we will immediately start he production for a new heavy metal BLIND GUARDIAN album, for which we have already composed most of the songs. That's our mission for the next year and after that we will for sure come up with at least a few shows featuring 'Legacy Of The Dark Lands' in the classical orchestration garment in the way that it was originally intended to be performed."

Dead Rhetoric: What do you have planned for 2020? You've already mentioned the new BLIND GUARDIAN album.

Hansi: "There's a lot of production for BLIND GUARDIAN, that's for sure. I would think this will occupy most of the year. My ideal schedule looks like we will end up handing in the next BLIND GUARDIAN album to the record label in September or October at the very latest. What I have on the agenda for 2020 is the release of the next DEMONS & WIZARDS album. We did some touring over the summer and it was quite an impressive experience to bring DEMONS & WIZARDS to the stage in a real touring format for the first time and see how the people reacted. It was a very pleasant surprise. At the same time, when we had some off time, we finished the successor for 'Touched By The Crimson King', and it's a very intense metal album. It will be released in the beginning of next year. Jon [Schaffer, also of ICED EARTH] and I discussed if that there is a chance for us to free up a few spots to add DEMONS & WIZARDS shows, but that is up in the air. The album will be released in the first half of 2020 and this is something that people can really look out for. It's a very vivid, entertaining and classy album."

"Twilight Orchestra: Legacy Of The Dark Lands" was released November 8 via Nuclear Blast.

To create the concept, lead guitarist André Olbrich and Kürsch worked alongside German bestselling author Markus Heitz, whose latest novel, "Die Dunklen Lande", was released on March 1. The book is set in 1629 and contains the prequel to "Legacy Of The Dark Lands". 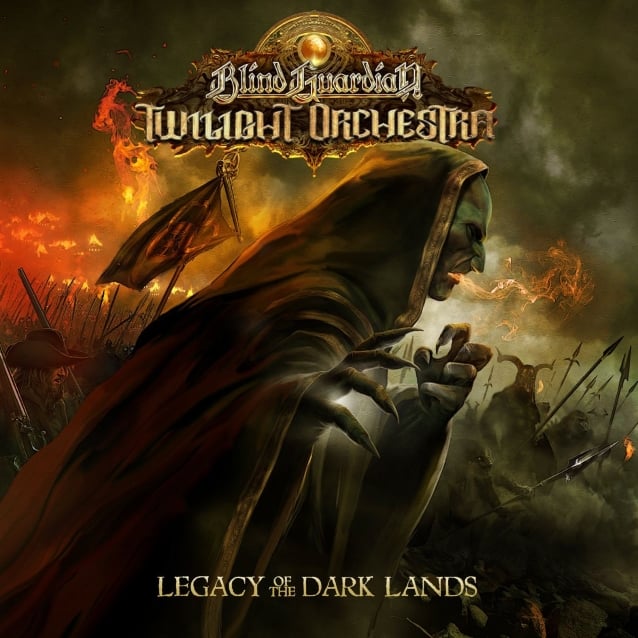