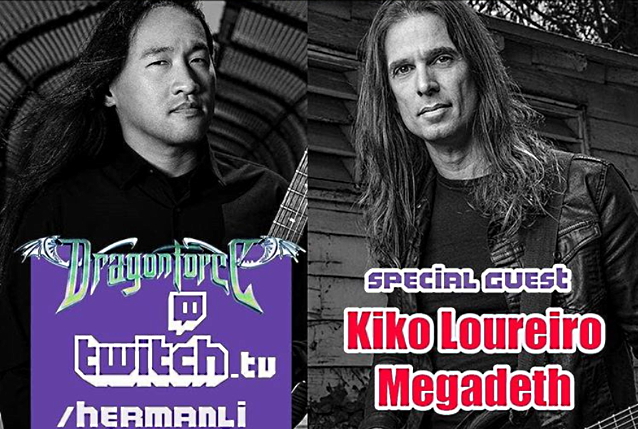 This afternoon (Friday, December 13), come hang with DRAGONFORCE's Herman Li and MEGADETH's Kiko Loureiro on Twitch. Beginning at 1 p.m. PT / 4 p.m. ET, Li and Loureiro will chat with you and do some jamming too.

In a 2016 interview with Communities Digital News, Li said that he started playing the guitar when he was 16 years old. "I basically wanted a new hobby," he said. "I got bored of the sports I was doing and was also bored of video games. I got an electric guitar as a late birthday present from my parents."

Regarding which guitarist have inspired his playing, Li said: "There are so many guitar players I love listening to and many of them have influences some more than the other. The ones that influenced me the most are probably the following: Joe Satriani, Steve Vai, Tony MacAlpine, John Petrucci, Marty Friedman, George Lynch, Vinnie Moore."

DRAGONFORCE is continuing to tour in support of its eighth full-length album, "Extreme Power Metal", which was released in September.

Last year, Kiko told Loud Trax that he initially had a difficult time figuring out how to plays the MEGADETH songs his own way while still staying true to the way the original guitar players recorded the tracks.

"When it comes to the rhythm parts, I play with Dave [Mustaine], so I have to match the way he plays, which is really hard, because he has his unique way of playing the rhythms, the riffs," he said. "That was the toughest part, I have to say. But now, I'm playing way better — the rhythms and the riffs now. I'm learning with the master, so it's great for me. And the solos, I don't play much [along to the albums] — I just listen and I try to get the vibe of the solos of the song, and then I keep listening and listening, and then I get the instrument and then I try to play. I've been playing guitar for many, many years, so I think it's just a combination of the feeling that I get from the song and then the way I play."