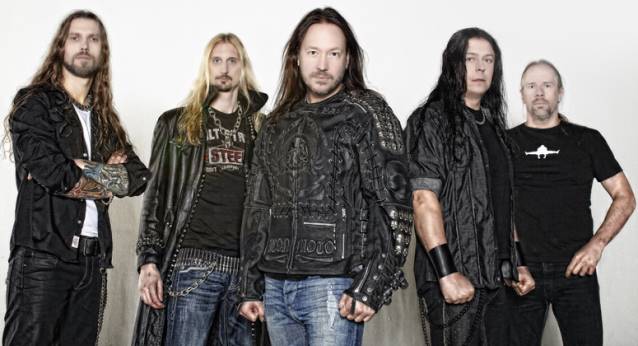 Two years ago, Swedish melodic metallers HAMMERFALL announced a creative break after celebrating their 15th anniversary of their legendary debut, "Glory To The Brave".

"We are taking a pause to ensure that we have another 15 years ahead of us," guitarist Oscar Dronjak said at the time.

"The plan is to use the year off to recharge our batteries and come back more vital than ever with a new album in 2014," added singer Joacim Cans.

HAMMERFALL's anniversary show in Dalhalla was recorded and released on DVD, followed by an appearance at the Wacken Open Air. The German festival was the site of the first show HAMMERFALL ever played outside of Sweden, and marked the beginning of the long and passionate relationship the band has enjoyed with the German metal fans.

It has just been announced that HAMMERFALL will return to Wacken Open Air in 2014 for the festival's 25th anniversary. And the show will be a special one. Dronjak explains: "It's very fitting that, when Wacken celebrates its 25th anniversary, they will get a proper 'Glory To The Brave' anniversary show. This will be a throwback show to the European gig that launched it all for us: Wacken Open Air 1997. The setlist will consist of all the songs from the first album and we'll, of course, add some newer songs at the end. We will do this very unique show at Wacken and nowhere else, so if you miss it, you missed it."

August 2014 will also see the arrival of a new studio album from HAMMERFALL. A single — released on vinyl and digitally — will precede the full-length effort in June. Dronjak explains: "We've all kept ourselves busy with various projects of a musical nature, but, man, it feels good to finally announce that we're going to release a new HAMMERFALL album next year!

"The album is set for an August release, and we have already begun writing songs for it.

"It's always difficult to tell which direction we will end up going in when you're in the middle of it, but it feels like this will be a mix of the very best of what we have done over the years.

"The time off has given us perspective on a lot of things, and the new material seems to reflect this.

"We're all super excited to get this going again and bring you a revitalized and reenergized HAMMERFALL!"

HAMMERFALL's new album will mark a renewed collaboration with the band and Fredrik Nordström, HAMMERFALL's producer from their early days. Cans says: "It's a great honor to have Fredrik Nordström back as the main producer for HAMMERFALL. As the father and founder of 'The Gothenburg Sound' as well as the producer of 'Glory To The Brave' and 'Legacy Of Kings', we are confident that he will take our music to new and yet unreached levels."

James Michael, who had co-produced the band's latest studio album, "Infected", will once again helm the vocal recordings.

"In order to maintain the high vocal standard set on 'Infected', we will return to USA and record with multitalented SIXX: A.M. vocalist James Michael," adds Cans. "Never have I experienced such great set-up and environment as when we recorded the previous album. Even though things will be different this time around, since he is re-locating in Los Angeles, I am damn sure he will make my vocal cords deliver like never before."

The artwork of HAMMERFALL's new album will be designed by none other than Andreas Marschall, who actually was the creator of Hector, which was seen on "Glory To The Brave" and many other great HAMMERFALL artworks.

"There has never been any doubt in our minds that we would be back, and the moment we made the decision to take a much-needed break, we already had a strategy for the future of the band," says Dronjak.

"A new album in 2014 has always been the plan, and when Joacim and I started to discuss the parameters for the next HAMMERFALL album, we found that one of the first points we immediately agreed on was that we should consider asking Andreas Marschall to do the cover artwork.

"Andreas is responsible for the first three HAMMERFALL albums, and it seemed like the perfect time to let him interpret Hector again."