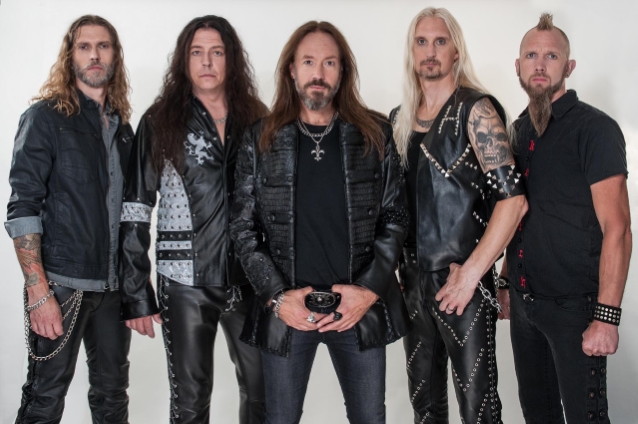 Swedish metallers HAMMERFALL will enter the studio on January 7, 2019 to begin recording their new album. Titled "Dominion", the disc will be released on August 16, 2019 via Napalm Records.

HAMMERFALL's last album, "Built To Last", was released in November 2016 via Napalm Records.

Last year, drummer David Wallin returned to HAMMERFALL — nine months after he left the group in order to focus on his family life.

HAMMERFALL guitarist Oscar Dronjak told Music Life Magazine about Wallin's decision to come back to the band: "[David] had some problems with being away from his kids and stuff, just different things at home that made him not being able to be on the road for as much as we wanted him to be. So he had to step down. We got Johan [Koleberg, formerly of THERION and LION'S SHARE], but we felt kind of like we missed David, because he was such a great fit, and he brought so much life into the band when he came into to replace Anders [Johansson] that we kind of asked him, 'Would you like to come back? Or is there any way [we can make it work]?' And I think he kind of missed it too, because he realized that this is an opportunity for him, of course. Plus we do a lot of tours, a lot of big things that he would like to be a part of. Of course, we pay him well. So, you know, he's just getting taken care of. But for me, more than anything else, it was the connection of five people getting together because HAMMERFALL has never sounded anything as good as we do right now."

HAMMERFALL released the 20th-anniversary edition of its second album, "Legacy Of Kings", as a 2-CD/DVD box set on December 7 via Nuclear Blast.

Posted by Hammerfall on Tuesday, December 18, 2018