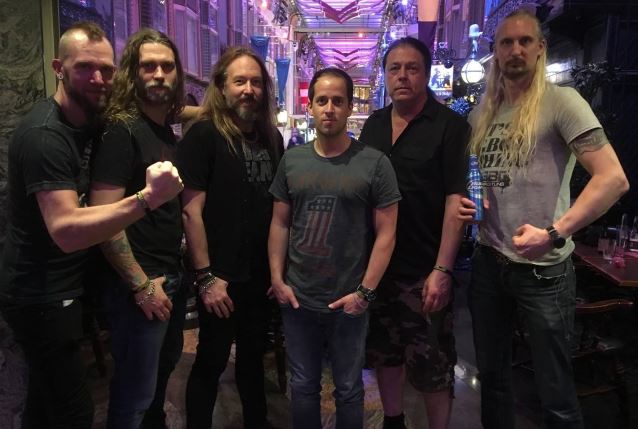 Swedish metallers HAMMERFALL have inked a deal with Austria's Napalm Records. The band's as-yet-untitled tenth studio album will be released on November 4.

Commented HAMMERFALL singer Joacim Cans: "After two exciting decades in the line of metal duty, I feel that signing with Napalm Records is the necessary step we need to take in order to grow as a band and reach the next level.

"Even though we've been around for such a long time, we are still hungry and craving for more. There are still territories left to conquer and metal hymns left to write.

"In the past, Napalm has proven to be a very strong and reliable label with great success and chart entries with bands like W.A.S.P., MONSTER MAGNET, KAMELOT and POWERWOLF."

Added HAMMERFALL guitarist Oscar Dronjak: "HAMMERFALL has been very successful and happy with Nuclear Blast for almost 20 years, but in order for us to continue to grow as a band and reach new heights, we needed a fresh challenge. This felt like a right and necessary step at this point in our careers, in order to keep moving forward and upward at a high speed. We view this label change as an opportunity to create something special, and firmly believe our best times are still ahead of us. That's why we're very, very excited to work with the people at Napalm Records for our upcoming, tenth studio album!"

Stated Napalm CEO Thomas Caser: "The signing of this extraordinary band is the major milestone for Napalm Records. HAMMERFALL's signing unlocks a lifetime achievement for all of us at Napalm Records, but also for me personally as well! We put all of our efforts into making this happen as a team, as we believe HAMMERFALL are one of the greatest heavy metal bands of all time, and this is just the start of a huge world-wide campaign. Fans can feel rest assured that we will spare no efforts to make HAMMERFALL bigger than they have ever been!"

In a December 2015 interview with Spark TV, Dronjak stated about the songwriting process for HAMMERFALL's next album: "We have been [working on new material] for a couple of months, actually. 'Cause we have always an idea, we wanna release the album at this point and then we do the tour at that point. And then if you have a sort of a release date in mind, you have to start preparing for it really early. And this time there won't be any… 'Cause we tour a lot more this time than we normally do, so there hasn't been this period of rest between end of tour and start of the album recording. So we have to start writing early, basically."

Regarding whether it's "easier" for HAMMERFALL to write new music after "(r)Evolution", Oscar said: "No, it's not easier. '(r)Evolution' was quite easy, because it's been a while, so we had a lot of inspiration that was dying to come out, Whereas now, I find it hard… For me, I always want to be removed from the live situation when I write songs, and it's very difficult when you know that in three weeks you're gonna go out on tour again."

He continued: "I don't think I would be able to do it if I was like I was when I was younger, but now I plan ahead much more. I have to. It's what Joacim has always done, but I've never really cared about it because I didn't have to. But now I have a family and everything I have to take care of, so I think about things like that."

"(r)Evolution" sold around 1,900 copies in the United States in its first week of release.

The band's previous CD, "Infected", opened with around 1,700 units back in 2011. The CD debuted at No. 16 on the Top New Artist Albums (Heatseekers) chart, which lists the best-selling albums by new and developing artists, defined as those who have never appeared in the Top 100 of The Billboard 200.