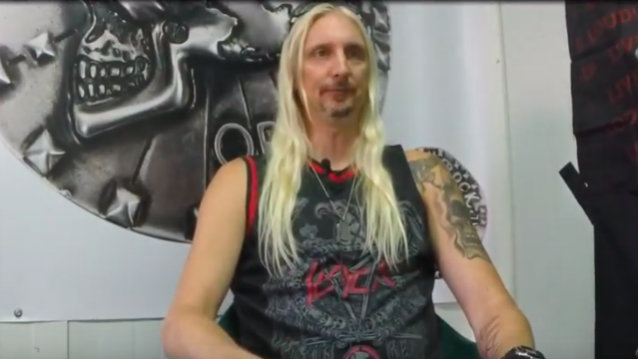 Spain's TNT Radio Rock conducted an interview with guitarist Oscar Dronjak of Swedish melodic metallers HAMMERFALL at this year's edition of the Leyendas Del Rock festival, which was held August 9-12 at Polideportivo Municipal de Villena in Villena, Spain. You can watch the full chat below. A few excerpts follow (transcribed by BLABBERMOUTH.NET).

On the reception to HAMMERFALL's latest studio album, "Built To Last":

Oscar: "The album is not even a year old yet. It's actually [been out] eight or nine months, but the reaction was really, really good, I think. It's always a danger when you release a new album. It does not matter what I think about it. I knew I liked it, but we have to make sure the other people like it, too. The only way you can do that is to release it for the audience. And, if you look at the songs from the album that we play live, they fit really well into the set. I think we're going to keep playing several of them for the next tour. 'Tremendous' is the answer to your question."

Oscar: "The reason is we switched labels is because we've been with Nuclear Blast since day one. It was 18 years, I think it was, in total. We were happy with them. They did a good job, there's no question about that. We're still friends with them, too. They have all the back catalog, there's going to be a 'Glory To The Brave' anniversary edition coming out in a couple months from Nuclear Blast, so we still deal with them and are on good terms. The reason we wanted to make a change is because we felt they took us a little bit for granted. Like, 'No matter what, they're always going to be on Nuclear Blast.' It felt like they didn't apply themselves as far as we wanted them to. We started to look around for a different label. The way I see Napalm is Napalm is where Nuclear Blast was 20 years ago. Young, upstart label on the rise. That's why we decided to take a chance with them."

On whether he considers HAMMERFALL to be a "power metal" band:

Oscar: "I don't like the term 'power metal,' to be honest. I never have. I think it's misleading to what HAMMERFALL is doing. For a band like TWILIGHT FORCE, it's much more suitable. I like TWILIGHT FORCE, I think it's a great band, actually, but that's not the point. The point is the way I saw it when we started HAMMERFALL in the early '90s, middle of the '90s, power metal did not exist back then, at least not the name for it, anyway. What we wanted to do was play the music that we loved and that happened to be heavy metal and people did not like heavy metal back then. A lot of people were looking down on us and stuff. So, we said, 'Fuck those people. We embrace heavy metal because that's what we are.' Ever since day one, I always call us a heavy metal band. I don't think power metal… it's too narrow to encompass that everything HAMMERFALL is, I think."

Nuclear Blast released the gold and black vinyl, as well as the digital version of "Glory To The Brave – 20 Year Anniversary" on December 1 — with the extensive fan box set dropping on December 15.