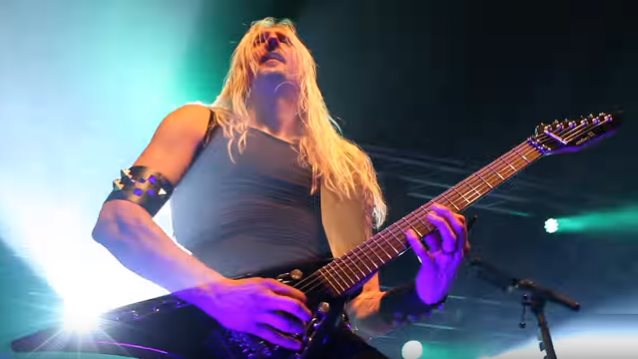 Italy's Rock Rebel Magazine recently conducted an interview with guitarist Oscar Dronjak of Swedish metallers HAMMERFALL. You can now watch the chat below. A couple of excerpts follow (transcribed by BLABBERMOUTH.NET).

Oscar: "Well, that's a little bit of a tricky situation, because, let's see, right when we released '(r)Evolution' [2014] two years ago, or three years ago almost, Anders [Johansson] quit the band, and he'd been the drummer for HAMMERFALL for fifteen years. So we had to find a replacement. We found a really good one in David Wallin. He was playing all the shows on the whole tour and also on the album 'Built To Last' [2016]. But when it came to the tours now, unfortunately, David couldn't join us because of family matters. So we had to bring in yet another drummer, so it's a bit of a… It's kind of a SPINAL TAP thing where they go through drummers like crazy; they all explode or whatever. But, yeah, so it's weird. But now we have Johan [Koleberg]. He works really well playing live and everything, but again he did not record the album. So it's, like, a step too late all the time. But David did a great job on the album, I think. He recorded the drums in exactly the way that I envisioned when I wrote the songs, what I had in my mind for this. And Johan, basically, just plays the songs the way they're supposed to be, so to speak, and adds his little flair to things as well. So I think things work really well now."

On the label switch from longtime home Nuclear Blast to Napalm for "Built To Last":

Oscar: "Well, we got an offer from [Napalm] for, I think, a couple of albums, and at that point, it seemed like it was the right move for us. We kind of felt that Nuclear Blast… I mean, we'd been with them for seventeen years, and there was a reason for us to be with them for such a long time; we were happy with what they were doing. But, at this point, we felt that we needed to make this change — for ourselves and for the band — to be able to progress and grow a little bit. That was what we felt was necessary."