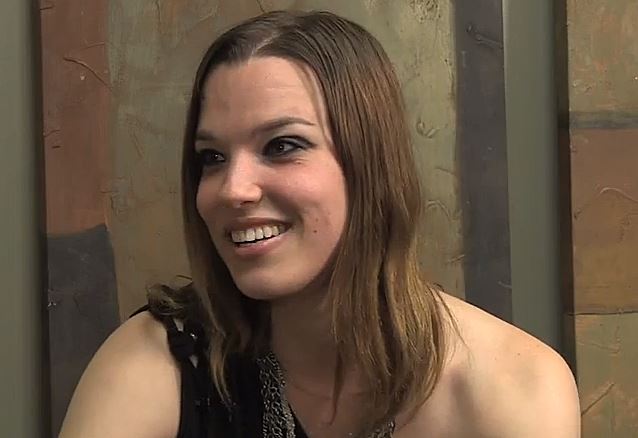 On October 29, Niclas Müller-Hansen of Sweden's Metalshrine conducted an interview with vocalist/guitarist Lzzy Hale of Pennsylvanian rockers HALESTORM at Arenan in Stockholm, Sweden during the band's European tour with ALTER BRIDGE and SHINEDOWN. A couple of excerpts from the chat follow below.

Metalshrine: You recorded a DIO song that didn't end up on [HALESTORM's new EP, "ReAniMate 2.0: The CoVeRs eP"].

Lzzy: Yeah, we recorded Ronnie James Dio's "Straight Through The Heart" and that one is gonna go on another project that I can't speak of right now. It's pretty awesome! It's gonna be a lot of different people on this record that it's coming out on. I'm excited for the people that asked us to do it, and I'm also excited to be included. We were gonna include it on the EP, and that's the reason we recorded it, but then when this project came up, we said, "OK, we'll save it for that." That was the stipulation. They said, "We're gonna release this, but if it comes out before then, it's gonna be weird."

Metalshrine: What's the plan after this [European tour]?

Lzzy: We go home on the 17th of November and then we have about a week off and then we have a headlining tour until the middle of December in the States. Then we break for Christmas and we'll be taking a little bit of time off at the beginning of the year, to settle down and do another record. We always write, but we've begun trying to narrow it down and writing for the next record.

Metalshrine: Do you sit down and go, "OK, this is what we're gonna do"? Take the music in another direction or stay with the HALESTORM sound?

Lzzy: For the most part, it's a little bit of both, because we usually try to go, "What's the next step?" We don't wanna make the last record, but we don't necessarily wanna depart completely. We're not gonna put out a country record. [laughs] We do wanna take a little bit of a risk and I fell there's gonna be a couple of songs or pieces of songs where there's different styles within the rock realm that we haven't really experimented with yet. Just diving in head first and we also don't wanna do what everybody normally does with their third record and we don't wanna go softer. I think we wanna go a little bit more aggressive. There's a lot of things that we've been thinking about. It's exciting but also extremely frustrating, because now it's real and we gotta figure it out now. There's so many different things we wanna do and we're just trying to organize it all and then get all the songs finished. It's quite the task, to the point that you have to put stuff down on your phone between catering on a day like this. We're in that obsessive mode right now.

Metalshrine: I read that someone asked you about doing Playboy and you weren't totally against it. Is that something you feel is a necessary thing to do these days? What would your parents say about it?

Lzzy: I think my mom said something like, "You're gonna do that after I'm dead, right?" No, I don't think it's necessary at all and it's your own prerogative. I do find myself walking a certain line and obviously you can walk out in the short shorts and high heels, but as long as you've got something to back it up with. To me, it would have to be a good situation, whether it would be Maxim or Playboy or something like that. And again, it would have to do with however I feel at the moment. If I feel I wanna be a little bit debaucherous and do that, I probably will. I feel bad for people who think it's a necessary evil. If you're going to do that, it has to be your decision and have it be a selfish situation.

Metalshrine: Is it a bit of an ego boost as well?

Lzzy: I think so too. I don't know… If you're one of those people that has been working extremely hard for many years with your body or your image to look good and you wanna show everybody that, more power to you! If you're one of those people that don't wanna do it for moral reasons or religious reasons, do not! It's your prerogative. I'm more of a pro person and whatever you feel like doing, rock on! I'm not entirely a religious person either, so I don't have a whole lot holding me back. [laughs] I relate that a lot to my music as well and just the way I do things.