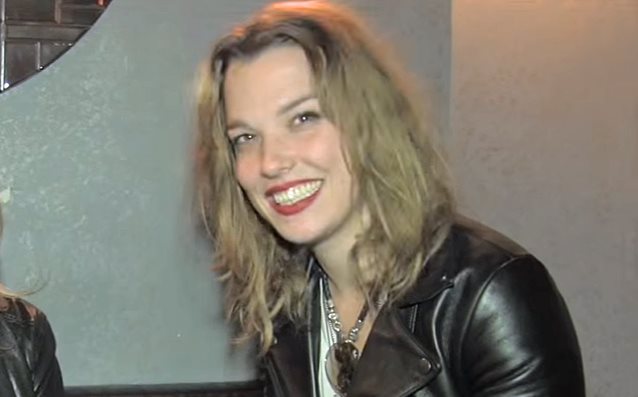 HALESTORM frontwoman Lzzy Hale was interviewed by Terrie Carr for the latest edition of "Box Of Rock" on WDHA-FM 105.5 FM, the rock music station licensed to Dover and Morristown, New Jersey. You can now watch the chat below.

Asked about how HALESTORM's success might have contributed to the recent surge in the number of females fronting their own groups, Lzzy said: "Just to be a part of it is so cool. It's really neat to see that kind of flood happening right now. And it's really starting to… I mean, I wanna say it evened out, but I think it's tipping the scales, 'cause we've been doing a lot of festivals lately, and it's just so many girls.

She continued: "It's something that [recent tourmate] Lita [Ford] and I have been talking a lot about, because she kind of kicked the door open for both myself and [fellow tourmate] Dorothy, all of us, to kind of waltz right in. And it's a huge testament to just the strength… And you have to kind of have blinders on to everything. Don't worry about what people think. Don't quit. Don't worry about opinions, especially [on the] Internet; don't worry about that.

The band's third album, "Into The Wild Life", debuted at No. 5 on the Billboard 200 album chart, selling 56,000 copies in its first week of release — more than double the first-week haul of their second CD — but has not reached gold yet.