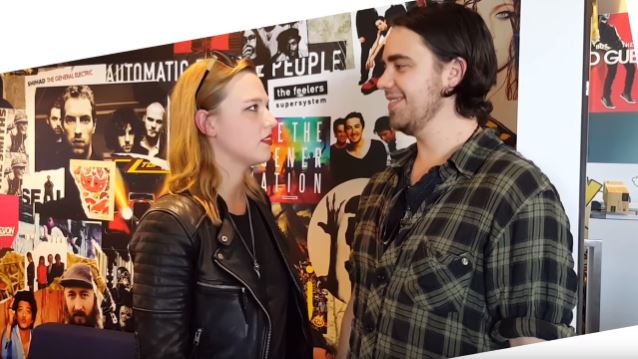 HALESTORM frontwoman Lzzy Hale and guitarist Joe Hottinger recently answered a number of "tough" "This Or That" questions for Warner Music in New Zealand. Check out their responses below.

HALESTORM is among the many top artists who have recorded renditions of EAGLES OF DEATH METAL's "I Love You All The Time" as part of the Sweet Stuff Foundation's "Play It Forward" campaign to aid victims of last November's terrorist attacks in Paris. The track is available now on the iTunes Store, Amazon, and Spotify, as well as the official "Play It Forward Store."

HALESTORM has announced details of a major North American headline tour. The dates begin April 1 at Reading, Pennsylvania's Reading Eagle Theatre in the Santander Arena and extend through late May. Support throughout the trek comes from special guests DOROTHY and the legendary Lita Ford. In addition, the tour will include stops at a number of festivals and summer radio concerts as well as a pair of much-anticipated dates alongside the one and only ROB ZOMBIE, slated for May 18 at Bloomington, Illinois' Cellular Coliseum and May 19 at Saginaw, Michigan's First Merit Bank Event Park.