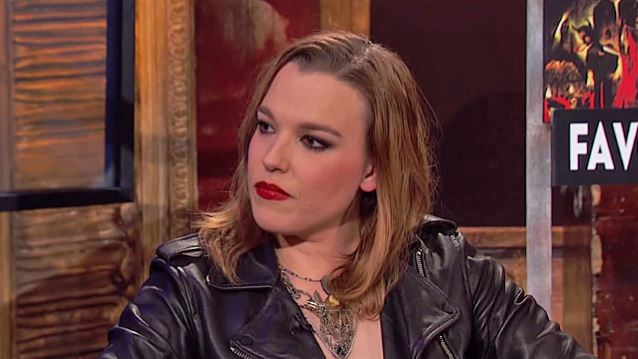 HALESTORM frontwoman Lzzy Hale was interviewed by rock journalist Mitch Lafon for a recent edition of the "One On One With Mitch Lafon" podcast (Facebook page). You can now listen to the chat using the Spreaker widget below.

Asked for her thoughts on the persistent rumors of a reunion of the classic GUNS N' ROSES lineup, Hale said: It got me so excited when I was hearing it come down the pike from friends… And, I mean, in the back of my head, I know it's true, and then in the front of my head, I'm, like, 'Oh my God! I hope I'm right. I hope everybody's right that's been telling me.' 'Cause it's heartbreaking when you know of these bands that influenced you that were great bands. These are guys that changed the face of rock on whatever level that you wanna put them on, and it's a shame when they can't get along, or they don't wanna get back together, or they don't speak. Because I can't imagine, in my band, we've literally spent over twelve years, like, living two feet from each other, and I can't think of anything that anybody could possibly do that I wouldn't even wanna speak to them anymore. So, to me, just on that level of it, I'm excited for them, and I'm excited for that to happen."

Hale was also asked what her reaction would be if HALESTORM was asked to open for GUNS N' ROSES on a hypothetical reunion tour. She said: "Are you kidding me? If that call comes in, I will walk there if I have to and play the show."

Lzzy has performed the GUNS N' ROSES classic "Out Ta Get Me" with GN'R guitarist Slash and his band MYLES KENNEDY AND THE CONSPIRATORS on several different occasions, including on June 10, 2012 at Heineken Music Hall in Amsterdam, The Netherlands. She later stated about the experience: "It was so cool. When we started the song, out of habit I went into live rock mode and kind of spaced out for a second and then went into the middle section where we were just kind of riffing with the solo and just kind of lost my mind for a second. I was like, 'What's going on? Slash is right here! He’s sweating on me!' It was so cool; it was the best thing ever."

HALESTORM recorded a cover version of "Out Ta Get Me" for its 2011 EP, "ReAniMate: The CoVeRs eP", which saw the band putting its unique stamp on a diverse collection of classic songs, including tracks by THE BEATLES, HEART, TEMPLE OF THE DOG, SKID ROW and LADY GAGA.

Rumors about a reunion of the classic GUNS lineup have been heating up ever since the summer, when Slash revealed that he and singer Axl Rose had repaired their relationship after nearly 20 years of estrangement.