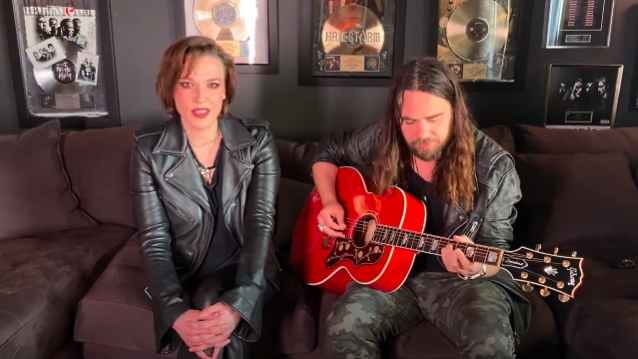 Lzzy Hale and Joe Hottinger from HALESTORM have recorded a special message for the staff at the Robert Wood Johnson University Hospital in New Brunswick, New Jersey. The four-and-a-half-minute video, which includes an acoustic performance of the HALESTORM song "I Am The Fire", can be seen below.

The band was planning to begin pre-production for the new album before the pandemic began, with Hale explaining: "That isn't necessarily gonna be happening anytime soon. But I'm more or less using it to my advantage. Because now all I have to do is top whatever I've been writing and make sure I have enough content for when this actually all starts happening again."

Hale added that the pandemic has begun to have an impact on her lyrics, saying: "The weirdest thing is how now the subject matter has kind of changed. With writing lyrics, there's a bunch of different things that I think I was really excited about or into a couple of weeks ago, and now, I don't know — lyrics mean something different now."