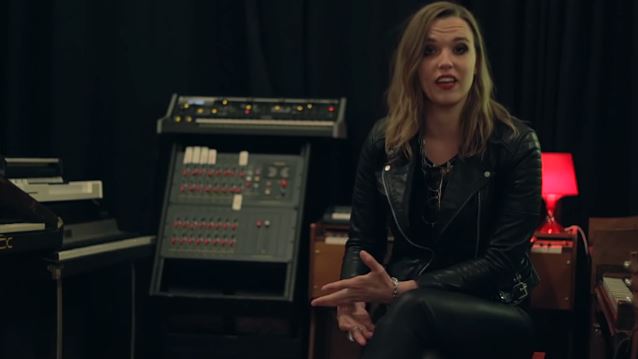 HALESTORM has just posted the second in a series of video clips from the studio where the band is recording its third album. Shot during the quartet's second week in the studio, the 14-minute clip, which can be seen below, features each of the group's members discussing their work and hinting at what fans can expect from the follow-up to 2012's Grammy-winning sophomore effort, "The Strange Case Of…"

Noting that the band members are recording their tracks together instead of individually, frontwoman Lzzy Hale said in a previous update, "It's very performance-based. It's very much based on whether or not we can all hit it at the same time or whether or not I can hit a note without having to be auto-tuned or something like that. It's definitely a challenge."

Drummer Arejay Hale added: "It's a way more organic way to record, which is a good thing and a bad thing. The good thing is that it really captures what we are as a band. It's not manufactured or super edited or super perfect."

Lzzy Hale took time out from the recording of the CD to discuss the project with Shor Bazaar, Pakistan's first international artist management services. Asked if HALESTORM is going in a harder and heavier direction on the upcoming effort or if the group is going back to its rock roots, Hale said: "As always, we're kind of always chasing whatever gets us excited. And that's how we've done each record. With this one, there's obviously gonna be some surprises, because we're using… We've discovered… Either we're growing as musicians or we're discovering new things to get us excited. But, as always, it's probably gonna a little bit of both, because we obviously can't run too far from our heavy roots. Obviously that's always gonna be there. There's always gonna be that JUDAS PRIEST album that I'll listen to when I'm working out, and [I'll be, like], 'Oh, we need a song like that.' So that's always gonna happen. But there's definitely gonna be a few surprises on this record. If nothing else, the goal for this next record is to kind of bridge the gap between what people hear on our albums and what they see live. So a lot of it is kind of going to be… There's gonna be a lot of us [laughs] on this record."

Hale recently admitted to Gearphoria that there was more pressure this time to follow up the success of 2012's "The Strange Case Of…" She explained, "We've definitely evolved. The one thing that has remained the same is that we're all perpetually 14 years old inside, so we're all very immature. That hasn't changed much. But the animal or monster of HALESTORM has gotten bigger, and obviously there's more responsibility and also a little more on the line."

Hale added, "It blows my mind that not only are we making our third record for Atlantic Records, which is a feat in itself because we know so many bands that never make it to this one . . . but also it has been 18 years since my brother and I started HALESTORM, so there are moments of 'Can you believe we're still doing this?' It's mind-boggling."

"The Strange Case Of…" yielded two chart-topping rock singles in "Freak Like Me" and the Grammy-winning "Love Bites (So Do I)" .

HALESTORM debuted two new songs — "Heartbreaker" and "Mayhem" — at shows in Tennessee and England this past spring.

The new album will be the first one that HALESTORM has written mostly in the studio. Hale told The Pulse Of Radio that while she enjoys writing songs on tour, they're often different from what the band does in the studio. "Definitely," she said. "When everything is kind of more consistently tour-focused and not, you know, writing-focused, I definitely write differently. I explore different subjects without being picky about anything. So as things develop in my life, in either my personal life or professional, it's nice to explore all those different subjects, you know, without the pressure of being in the studio."

The band has also been taking time out from the studio to play shows here and there, which Hale has enjoyed, saying, "It's extremely inspiring to step out of the studio and then step in front of an audience and remind yourself why you're making these songs. It gives you perspective about what you're working on in the studio."

HALESTORM will embark on a U.S. tour later this fall, beginning on November 11 in Chattanooga, Tennessee.