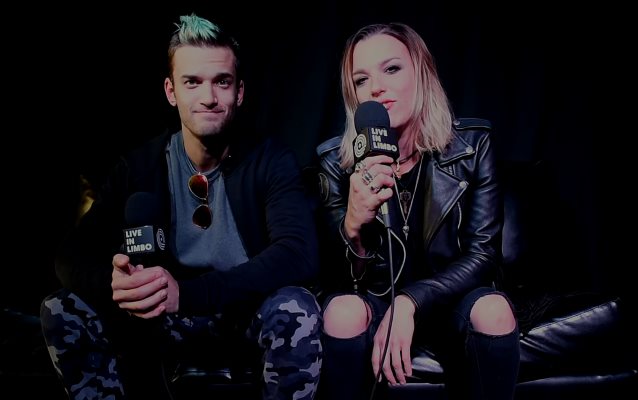 Live In Limbo conducted an interview with HALESTORM frontwoman Lzzy Hale and drummer Arejay Hale in Toronto, Ontario, Canada this past October. You can now watch the chat below.

Asked what their favorite thing is about staying connected to their fans online, Lzzy said: "For me, it's therapeutic in both ways. Part of the reason that I'm a songwriter is because the only way that I can really understand myself is by getting it out and talking it through or writing it out. So by having all these cool conversations with all these people, it's really, actually, entertaining for me, and it helps me kind of inadvertently figure out what I'm going through in my life by talking to them. They probably say the reverse, but it goes both ways."

Added Arejay: "It kind of keeps you on point when you're going in to write a record. For me, sitting down to write a song, it's cool to hear another perspective and it kind of gives you a better idea of what you're going for for your audience. That's definitely a big part of it. The other big part is having one-on-one interactions with our fans — not to get off subject, but not only with social media, but we also do a lot of meet-and-greets. We go out after the shows and we interact with the fans. Like, if we're doing big festivals, it's just mind-blowing being in front of that many people, so when you're going in to write a kick-ass rock song, then you kind of keep that in mind: 'What would this crowd love to chant, or love to sing along to?' You know what I'm saying? Not just the social media interaction, but the human interaction, I think, is a big part of it."

HALESTORM will release its third covers EP, "ReAniMate 3.0: The CoVeRs eP" on January 6, 2017 via Atlantic. Produced by Nick Raskulinecz (FOO FIGHTERS, ALICE IN CHAINS, KORN), the effort is available for pre-order now. All pre-orders will receive an instant grat of the first track release, a reworking of WHITESNAKE's hard rock classic "Still Of The Night".

The Grammy Award-winning band's take on JOAN JETT & THE BLACKHEARTS' "I Hate Myself For Loving You" will follow as a second instant grat download from Friday, December 30.