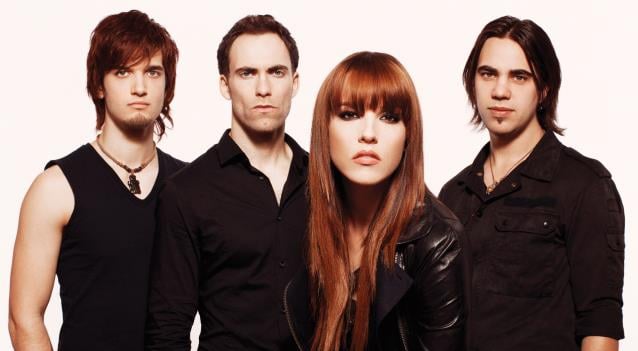 The official video for the HALESTORM song "Here's To Us" can be seen below.

"We wrote this song literally as our personal anthem," lead singer Lzzy Hale tells Rolling Stone. "We've been through a lot together as a band, and we've learned to celebrate the low times as well as the highs. It's about toughin' out and respecting the journey for us, and that's how we have kept it together as a foursome for 10 years! Here's to us!"

The song was previously covered on a February 2012 episode of the hit television show "Glee". Lzzy Hale told The Pulse Of Radio at the time why the band let it happen. "It's pretty much the strangest thing we've done so far as a band and also, I think, the most exciting," she said. "There's a little bit of controversy because, obviously, 'Glee' is very pop culture, it's very kind of Broadway, and personally I think it's really good for us, only because here's an outlet for us that it's gonna expose us to so many people that would not normally be seeking us out."

HALESTORM recently released a new version of "Here's To Us" featuring guest appearances by a number of well-known hard rock and heavy metal musicians can be seen below. Joining the band on the song are Slash, SHINEDOWN's Brent Smith, ALTER BRIDGE's Myles Kennedy, SIXX: A.M.'s James Michael, THEORY OF A DEADMAN's Tyler Connolly, DISTURBED and DEVICE's David Draiman and IN THIS MOMENT's Maria Brink.

"Here's To Us" (Guest Version) features guest appearances by: