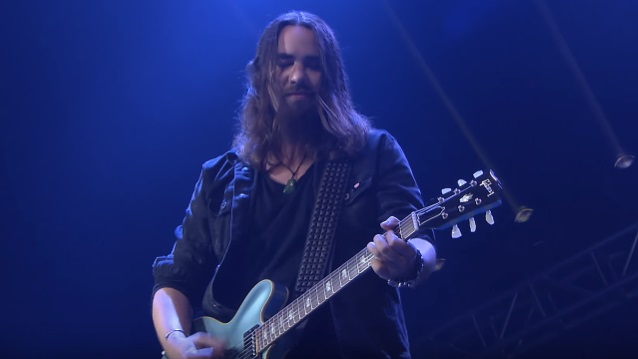 HALESTORM guitarist Joe Hottinger was recently interviewed by Faded World Productions. The full conversation can be viewed below. A few excerpts follow (as transcribed by BLABBERMOUTH.NET):

Joe: "There's so many. From when I was a kid, it was, like, the '90s rock scene — it was NIRVANA and SOUNDGARDEN, PEARL JAM, STONE TEMPLE PILOTS. Just anything that was being played on the radio in the '90s, I was pretty much all about. Then it kind of turned into Jeff Buckley and [LED] ZEPPELIN and the great guitar players — Stevie [Ray Vaughan]. That's where I'm coming from."

Joe: "We've never toured with FOO FIGHTERS. We've never even done a show with them, let alone a festival, so that'd be fun one of these days. I think it'd be a good match-up."

On his most memorable moment:

Joe: "There's been so many. We've been lucky, and just had a lot of things you dream about when you kid start happening. Winning a Grammy was fun. We didn't think we were going to win — we just went to go the parties. It turns out we won, which is crazy. Just being able to do this for a living — just soaking it in."

Joe: "It can be anything. It's like putting a puzzle together. Sometimes, it's the music, and then, I'm, like, 'Lzzy — do something on this,' and she'll do something. We just figure it out. It's really just about the moment. It takes us a little while, because you're just fighting for a good moment."

On his favorite song to play:

Joe: "Live, I like when we go into the improv sections. That's living to me — that's music, because you're just, like, on the edge with everyone else in the band, and you have to listen to each other and try to make this moment, and you're kind of talking to each other, but musically, and you can just fail miserably. Some nights, it's better than others. We've never really failed. Sometimes, we all get a little bit lost, and you'll land somewhere, but that's half the fun of it, too."

On the song he wishes he wrote:

Joe: "I'm always aspiring to make a moment as great as the one in 'Grace' by Jeff Buckley. When that flange comes in at the end and he's singing falsetto and ripping and takes it over the top, it's like, 'Oh my god — that's amazing.'"

Joe: "Festivals are amazing. There's tens of thousands of people in front of you. You can't beat that. There's an energy that comes from that that is mind-blowing. We have so many great memories. I remember in Kansas City, we played their Rock Fest. It was cold, and when we played faster, the crowd would start steaming. When we'd play a ballad, the steam would settle down a bit. If you walked up to the edge of the stage, you could actually feel the people, the heat. It was like an oven. The wind couldn't blow it away. It was bizarre."

On April 30, HALESTORM will kick off a co-headlining tour with IN THIS MOMENT that also includes fellow female-fronted hard rock acts NEW YEARS DAY and STITCHED UP HEART. The trek will include stops at a number of festivals and state fairs, including Jacksonville, Florida's Welcome To Rockville (April 27); Fort Lauderdale, Florida's Fort Rock (April 28); and Charlotte, North Carolina's Carolina Rebellion (May 5).

HALESTORM continues to work on its fourth album, which is being recorded at Dark Horse Recording studios just outside Nashville with Nick Raskulinecz, an acclaimed producer who has previously worked with RUSH, KORN, ALICE IN CHAINS and DEFTONES, in addition to having produced HALESTORM's third covers EP, "ReAniMate 3.0: The CoVeRs eP", which came out in January 2017.

Hottinger told the SiriusXM show "Trunk Nation" that the band's follow-up to 2015's "Into The Wild Life" will contain some of "the heaviest stuff we've ever done."