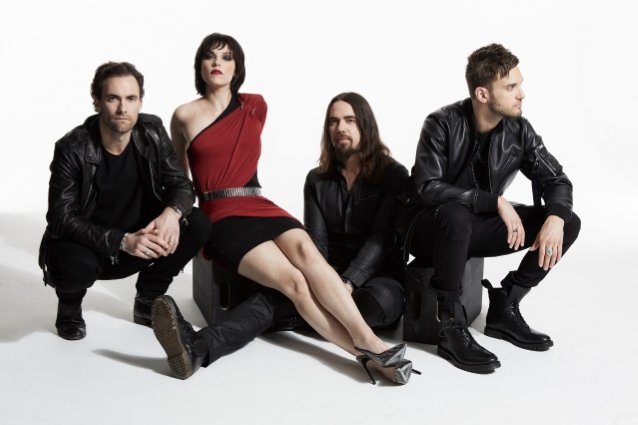 HALESTORM frontwoman Lzzy Hale and guitarist Joe Hottinger spoke to Primordial Radio's "Binge Thinking" podcast about the fact that the mainstream media seems to be ignoring new rock music. Joe said: "If music was a city, rock would be down in the ghetto; nobody really pays attention to us down here. And it's okay — we don't need it. And honestly, I'm so glad that we're a rock band. We have friends that are in pop bands that get a big hit, and their career kind of lasts for two years — they disappear and they're gone and they're just filled with disappointment and regret. We've been slowly growing for 20 years straight now and working, and we have a career, because rock fans are the best fans — they keep coming."

Added Lzzy: "'Cause it's not just about something that's catchy on the radio. This is a primal need. This genre is so special and it's so close to our hearts. So we just really wanted to, on this record [HALESTORM's latest album, 'Vicious'], just double down on that — it's gonna be us and it's gonna be rock and it's gonna just accentuate everything that we love about the genre."

Asked if winning the "Best Hard Rock/Metal Performance" Grammy in 2013 for "Love Bites (So Do I)" helped raise HALESTORM's profile, Lzzy said: "Yeah, of course. For us, just getting a Grammy was… regardless of what anybody in that area, or in that camp, thinks about… their respect, or lack thereof, of rock, whatever they think, we took it as kind of a personal triumph. Just like, 'Hey, guys, this is really crazy. We've been best friends forever. We've been working. We've been through tremendous highs and tremendous lows and everything in between, and we got a Grammy. That's really crazy."

Referring to the fact that MEGADETH's first-ever Grammy win in 2017 saw the band's walk up to the stage inexplicably accompanied by the sound of the house ensemble playing the song "Master Of Puppets" from MEGADETH mainman Dave Mustaine's former band METALLICA, Joe said: "Like we said earlier, rock is down, people aren't paying attention to us down here, and it's kind of how we like it. We do our own thing with this genre, and just 'cause these guys who run the band at the Grammy pre-tel, they don't care enough to learn that difference. That's why it'll always be ours and us folks down here living it and loving it."