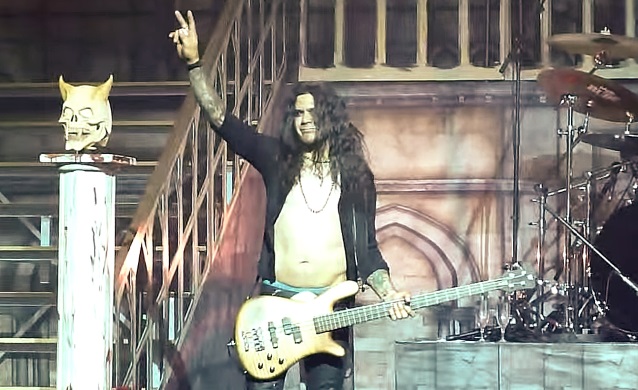 Former KING DIAMOND bassist Hal Patino has released a statement calling the band's frontman and namesake "a tired, bitter, old man" and denying that he has a drug problem, despite the singer's implications to the contrary.

After King announced Hal's exit from KING DIAMOND, Patino released a statement of his own claiming that he was offered a "totally ridiculous" salary for the band's five shows this summer, calling the move "disrespectful" and insisting that he quit the band in disgust two days before King announced Patino was "relieved of his duties" as the bassist for KING DIAMOND. King then responded with a lengthy message on his Facebook page, accusing Patino of "putting out extreme lies" about King's character and slamming Hal for asking for more money at the last minute after the fact that the rest of the band and the crew accepted the same salary as they had received for last year's European tour.

"I'm actually getting pretty tired of this already, but I feel like I have to tell the story from my point of view (without responding to every little detail in King's statement, 'cause that would turn this into a novel). After this, it's up to every individual to think/believe whatever they want to.

"WHAT THE FUCK!!? King has done it again!

"I got three kids who are using Facebook and reading the news on a daily basis.

"You're lying about stuff — like accusing me of doing drugs and calling me a liar is about as low and disgusting as it gets — but it really doesn't come as a surprise to me, because it has always been like this.

"I knew that something like this would come up, and King knows that if we could have come to some kind of an agreement, I would have been able to fly in and out from rehearsals to the shows in Norway… When I didn't hear from him (them)… I just quit !

"King! How can you call me a liar when I said that you did the same thing to my friends Mikkey Dee and Pete Blakk! They left the band before you told the press that they were fired !

"This (below) speaks for itself!

"[Quote from] Mikkey Dee [in] interview [with] Music Street Journal: 'King and record company said: 'Mikkey Dee was actually relieved of his services with King Diamond because he wanted too much money, blahblahblah' and I go, 'Monty, you fucking asshole, this is Mikkey at Kent, I didn't get fired, I left, you bastard, I'm gonna sue you,' you know. So they were making lies about it, and then when I joined DOKKEN, King called me up 'cause then he's been spreading the word about me, he did all the magazines and I did nothing, and now it was my turn to be in the press, people were fucking chasing me, 'Oh Mikkey, you're in DOKKEN.'

"Statement from King Diamond [in] 1990 — three months after Pete left the band: 'Pete Blakk was kicked out of the band due to lack of enthusiasm and drug problems.'

"As I know — and so many other people know, Pete was sober when we did 'The Eye' — and had been for 6 months.

"About my absence in the studio: I was down with the flu those few days. I called the studio back then — they we're fully aware of the reasons for my not being there.

"To everybody out there, I'm not doing drugs, I'm not even a drinker — but I always do a few whiskey shots right before I go onstage to get the right attitude, I don't see that as a 'drug problem.'

"Last: I would like to address King, if he reads this.

"Personally I don't care for the shit you are writing about me, I'm more concerned about my kids, family and friends, reading all your bullshit about me being a drug addict!

"You think you know what's going on in my life? You don't know shit… and you never will! Your real problem is that you are a tired, bitter, old man, that's the only thing I get from your statement.

"Just to end this now... I will NEVER forgive you! All that support you got from my family and especially my son Jackie [a.k.a. Maryann Cotton] who has promoted you through all kinds of media (TV, interviews, and so on). When you were told that he was in a writing process with Dick Wagner and Alice Cooper, you turned your back on him, even though you've known him since he was a little child.

"And you are right, I will never ever work with you again... Because this is what you get for being with KING DIAMOND for 19 years.

"To all the people out there that have expressed their support and concern: THANK YOU!"