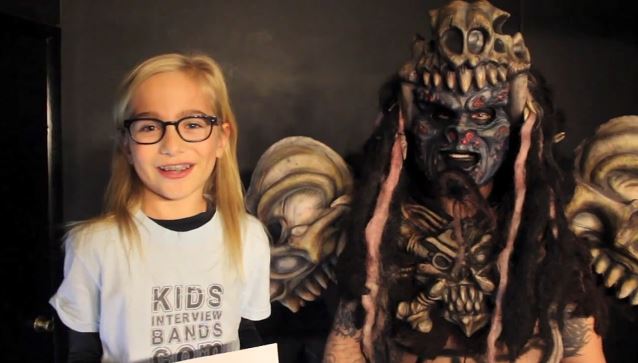 Piper of KidsInterviewBands.com conducted an interview with GWAR guitarist Pustulus Maximus on December 7 at the Newport Music Hall in Columbus, Ohio. You can now watch the chat below.

GWAR, the most brutal band in existence, bolstered its ranks prior to the "GWAR Eternal Tour". The Berserker Blóthar and Vulvatron are the latest intergalactic warriors to be banished to the pathetic mudball known as Planet Earth.

Blóthar; a fat, filthy, frozen space viking, will take over as GWAR's lead vocalist. The role of the red-hot cybernetic spitfire known as Vulvatron is more mysterious... Both feature prominently in the "GWAR Eternal Tour" — which is described as "the most shocking and entertaining rock show of the year."

GWAR fans have been mourning the loss of Dave Brockie, GWAR's founder and lead singer, since March. The "GWAR Eternal Tour 2014" gives them an opportunity to gather and share a bunch of feels as a community while experiencing the sickest band in this or any other world.