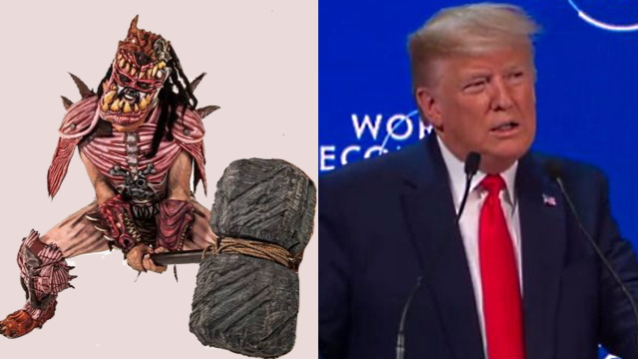 GWAR has released a "public service announcement" poking fun of President Donald Trump's recent suggestion that disinfectant could be "injected" into the body in order to treat coronavirus.

Trump made the disinfectant remarks on Thursday, after an official presented the results of government research that showed COVID-19 could be killed in minutes by bleach.

"I see the disinfectant where it knocks it out in a minute. One minute," Trump said. "And is there a way we can do something like that, by injection inside or almost a cleaning?"

Earlier today, the GWAR Twitter shared a video of drummer Jizmak Da Gusha saying to the camera: "Hey, everybody, it's Jizmak of GWAR coming at you with another PSA for the COVID-19.

"It was really great to hear our president in America say that it was okay to, you know, use bleach as a cleaner or as a drug. I mean, GWAR's been using it as a drug forever, so this is the stuff. You can inhale it. That's a fun way. You can try to smoke it, shoot it… Obviously, drink it is the best. That's what I like to do — you just get the big old bottle and just chug away…

"So if you wanna stay safe from COVID-19, drink bleach, shoot it, smoke it. Like I said before, GWAR does it all the ways."

"All right, people. Be safe, but stay sick."

On Friday, Trump told journalists about his original disinfectant remarks: "I was asking a question sarcastically to reporters like you just to see what would happen."

During Monday's COVID-19 press briefing, a reporter pointed out to Trump that the state of Maryland's emergency hotline had received hundreds of calls in recent days seeking guidance about the president's comments.

When asked whether he took responsibility at all for the increase in calls, Trump replied: "No, I don't."