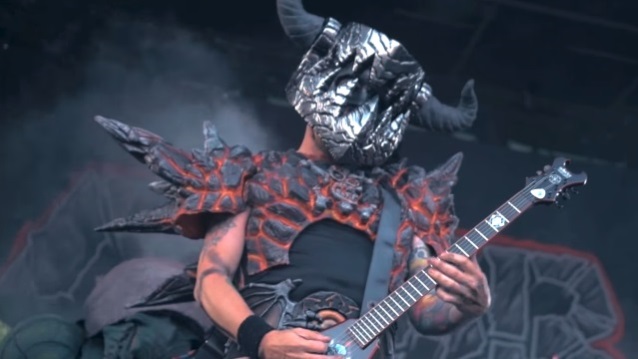 Longtime GWAR guitarist Michael Derks, who performs as BälSäc The Jaws 'O Death, has been diagnosed with myelofibrosis, a serious bone marrow disorder that disrupts the body's normal production of blood cells.

Derks revealed his medical condition via post on DKMS, an international nonprofit dedicated to the fight against blood cancer and blood disorders, in which he said that he "began to experience extreme fatigue and weakness" while he was out with GWAR on this past summer's Vans Warped Tour. "Eventually it got to the point where the people around me insisted that I go to the hospital," he wrote. "I was treated for severe anemia, but extensive testing did not reveal a cause. When I got home, my hemoglobin levels continued to fall and the only course of treatment has been a series of blood transfusions to keep my red and white blood cells from dropping to dangerous levels. I went for further testing at the Massey Cancer Center at MCV and the doctors there have diagnosed me with myelofibrosis, a disease that causes scarring inside of the bones and interferes with the marrow's ability to produce blood cells. If left to run its course, the doctors say I am most likely to only survive another three to five years.

"There is a treatment with a chance of curing my condition, a bone marrow transplant," he continued. "This procedure involves destroying my diseased bone marrow with high doses of chemotherapy, and then replacing it with healthy marrow from a donor. I will hopefully have the transplant early next year. I will spend a month in the hospital and then at least a year in recovery, where my immune system will be practically non-existent. The procedure has a mortality rate of 30%, but the Massey Center has brought this down to around 15%. With my family’s help and the support of my friends, I will beat this.

"Since the only thing I can do while the doctors try to find a matching donor is to get myself physically fit, I've decided to not let the impending hospitalization keep me from doing what I enjoy most, performing with GWAR," Derks said. "I will be joining them on the upcoming North American tour where we will be playing many of the songs from our new album, 'The Blood Of Gods', a record that I am prouder of than anything else I've put out in my 30-year career.

"I will be using labs across the country to monitor my blood over the next two months as we travel and will probably have to leave the tour at least once to come home for a transfusion, but as hard as the road can be, I look forward to the curative effect it can have on my soul. Everyone I have told about my condition have asked what they can do to help.

"I have teamed up with the incredible people at Love Hope Strength to offer a way for my friends and fans to not only help me, but all of the thousands of people out there in need of a bone marrow transplant. We are running a virtual drive to find donors to join the international registry of people willing to save a stranger's life. So, please, if you are willing and able, become a donor today. There is no obligation, it will just allow you to find out if there is someone out there who’s life you could save."

"The Blood Of Gods" was released on October 20 via Metal Blade. The disc was produced, recorded, mixed and mastered by Ronan Chris "Lord God" Murphy and will be made available in standard CD, 2LP colored vinyl and digital formats.