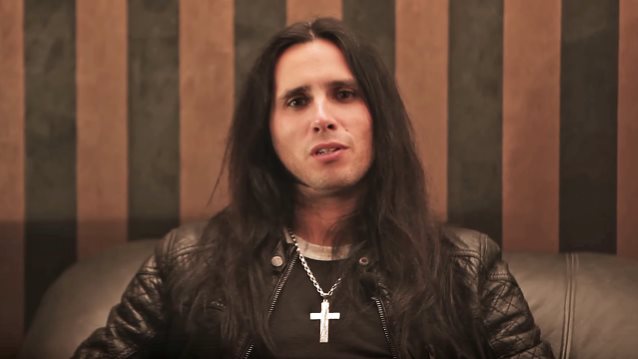 Greek guitar virtuoso Gus G., well known in rock and metal circles for his work as Ozzy Osbourne's guitarist and as leader of his own band FIREWIND, was interviewed by rock journalist Mitch Lafon for a recent edition of the "One On One With Mitch Lafon" podcast (Facebook page). You can listen to the chat below. A few excerpts follow (transcribed by BLABBERMOUTH.NET).

On the concept behind the new FIREWIND album "Immortals":

Gus: "Doing a concept record with the guys is something we talked about for years. It's not something new, but you need to have the right kind of material for that. You need to be in the right mindset, and of course, you have to decide what it's going to be about. For us, since most of us are Greek, we thought it would be cool to talk about our heritage, or some part of Greek history. In 2013, we took a break from touring and recording and I went on to do solo stuff. When I started gathering all this material over the years, I realized the character was very epic and more focused, like into power metal, and this epic style, so I thought it would be a good idea to do the concept record we talked about now. I needed a co-writer for this, so I reached out to [producer] Dennis Ward [UNISONIC, PINK CREAM 69]. To make a long story short, we decided to do a record about the battles of Thermopylae and Salamis during the second Persian invasion in 480 B.C."

Gus: "Of course he was considered. Mats was always a guy I wanted to work with. After FIREWIND went on hiatus, I started doing all these songs with Mats for my solo record. He became the main singer on my solo record, on the first one ['I Am The Fire'], at least."

Gus: "I had lost touch with Henning for a few years. Then there was one show Mats couldn't do, it was a festival a few years ago, and I reached out to Henning to bring him in to help me out with that. We started hanging out again and remembered the good times we had in 2007, so I asked him to help me out on the next couple of solo tours that I had. Then, it was one of those things where we started discussing FIREWIND again and when I would bring the band back again. He really wanted to be the singer. Honestly, Henning is the perfect guy for this band. He's one of the really great power metal singers of Europe. He's been doing it for a long time. He was looking to join a band; we were looking for a singer, and we knew him already. He's a good friend. We've toured with him already, so we knew he wasn't going to go weird on us."

On the 2013 departure of longtime FIREWIND singer Apollo Papathanasio:

Gus: "We both moved on. For me, when somebody leaves the band, it's done. I've never went back and played with somebody that either got fired or quit. In Apollo's case, he quit. He chose to quit. Obviously, he was the voice of the band. He was a very important part of the band. We were all disappointed in the group. We briefly tried it with another guy for our 2013 commitments, and it didn't work out. Then that's when we decided to just take a break, especially me, I started getting tired of it. I wanted to do other things."

On if he thought about dissolving FIREWIND entirely:

Gus: "It did cross my mind that I should have split up the band. During the last few years, it just felt like there was a lot of pressure, even from fans. I think it just happens when you start building a catalog and you've been around for a while, people have their own opinions, and they have their favorite eras and all of that stuff. It just started piling up too much with me. I needed a fresh start. As I went along with my solo stuff, which I really enjoyed doing… I'm a pretty stubborn guy, I'm not a quitter. I was thinking, 'I've worked pretty hard to establish FIREWIND, even to this level, for 15 years, I don't see a reason why I would quit because somebody decided to quit.' The guys had felt the same way. We decided we're going to come back."

On whether he's still a member of Ozzy Osbourne's solo band:

Gus: "That would be a question for him, not for me. [Laughs] I don't have any inside info, except for the news that we all keep seeing popping up on various web sites. I know he's been hinting at work on a new solo record, but when will that be? I sure don't know."

On whether Ozzy's recent songwriting sessions with BILLY IDOL guitarist Steve Stevens suggest Gus is out of the band:

Gus: "I don't know. I don't think [Ozzy] said that Steve Stevens is in the band. He said he was writing with him. I know some web sites went on to say, 'It sucks for Gus because he's not there anymore.' I don't think Ozzy ever said that. At least I didn't think that, anyway. That's something I've known about since last year. I've heard a couple of those demos he did with his buddy, Billy Morrison [who also plays guitar in Billy Idol's band], and Steve Stevens. Those guys are great songwriters. I love what they did on the last Billy Idol record. I don't know what the plans are. This is not the kind of band where I make decisions. I'm hired to play guitar. Whatever Ozzy and Sharon [Osbourne, Ozzy's wife and manager] decide, or their label executives, or producer, or whoever is going to be writing that… First of all, it's too early to say, and I would be the wrong guy to ask."

On whether he would accept an offer to play for another band:

Gus: "For me, I never saw myself as being a hired gun. It just so happened that I was asked by Ozzy to join his band. You don't say no to that. That was an amazing thing, even for me, it was weird because I'm not one of those session guys. I was never used to being a sideman, but I learned a lot from doing that. Other than that, I've always been the kind of guy that had his own thing going on, and I'm really enjoying doing my thing. I was never the guy who thought, 'Where do I go? Where's the next gig for me?' I don't look for that stuff. I have my own thing, which I've been working on for the last ten years-plus. That's what I see myself doing if I'm no longer with Ozzy, or when that happens. I'm just going to keep doing my thing."