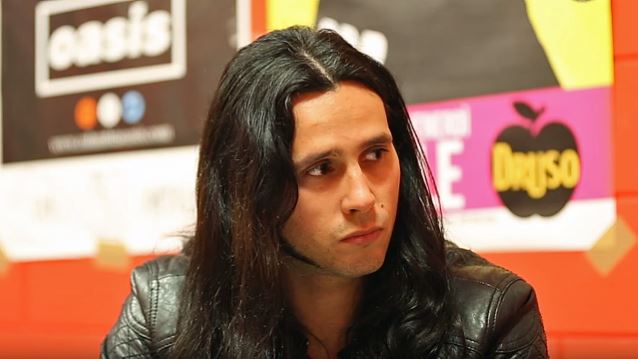 Italy's SpazioRock recently conducted an interview with Greek guitar virtuoso Gus G. — well known in rock and metal circles for his work as Ozzy Osbourne's guitarist and as leader of his own band FIREWIND — and the vocalist for Gus's solo band, Swedish singer Mats Levén (also of CANDLEMASS). You can now watch the chat below. A couple of excerpts follow (transcribed by BLABBERMOUTH.NET).

On working with Mats:

Gus: "It's great. He's the easiest-going guy I've ever worked with. We've been friends for so long — more than ten years — and we've always talked about doing something together, and it finally happened when I started working on my solo record. My first two solo records, I wrote a lot with Mats when I wrote with other people, but for the future, I wanna make a record with Mats as part of… from start to finish, 'cause we play a lot of shows together and we are really good friends, and we have a really good working chemistry together. Yeah, he's one of my best buddies and one of the best people in this industry to work with."

On how joining Ozzy Osbourne's band has affected his life:

Gus: "It was a big change for me, for my life and my career, and it was a wonderful thing, what happened. And I learned a lot from that. It made me want to become so much better and practice more and just get better of how I present myself, how I play, how I approach music. Yeah, it was just an experience of a lifetime. I only have great memories, and I can't wait to do some more stuff with him in the future."

Gus: "I'm the kind of guy who just likes to play. I always give it my best; it doesn't matter if it's a hudred people in the audience or a thousand or ten thousand or a hundred thousand. I like to do intimate gigs, and I like to play big shows, of course — all musicians do. It's all rewarding, you know. As long as there is interest there and people show up to see you play, it's fine with me."

Gus G. will embark on a mini North American headlining tour from April 15 to April 24. He will be joined by Jeramie Klinger (drums) and Taylor Nordberg (bass), both from THE ABSENCE, and Rob Rock of IMPELLITERI on vocals.

Gus's latest solo album, "Brand New Revolution", was released in Europe in July 2015 via Century Media. The CD was made available through Century Media in Australia and South America, Dismanic/eOne in North America and King Records in Japan. The cover artwork was once again created by Gustavo Sazes, who previously worked with Gus on the guitarist's debut album, "I Am The Fire", and also took care of artwork duties by such bands as ARCH ENEMY, KAMELOT and FIREWIND.