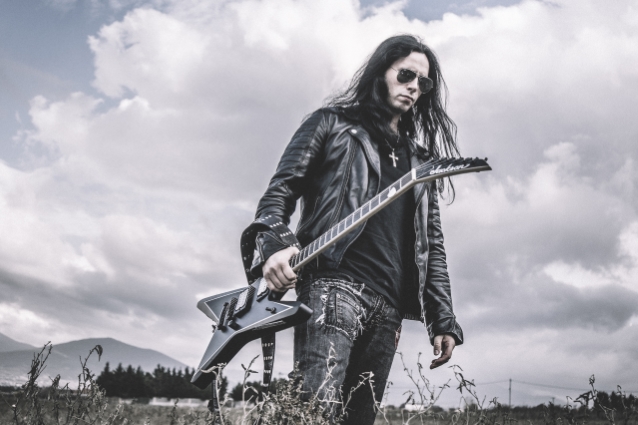 Greek guitar virtuoso Gus G., well known in rock and metal circles for his work as Ozzy Osbourne's guitarist and as leader of his own band FIREWIND, has answered a number of fan-submitted questions in a new video posted on his official YouTube channel.

Asked why he continues to live in Greece when there are so many more opportunities for him in America, Gus said: "That's a very good question. I have spent a lot of time in America in the past, and I still try to do one tour every year, and I go there on business trips all the time. However, I decided a long time ago, because my lifestyle is basically on the road, I decided, 'Where do I wanna be when I am away from touring, when I'm not touring?' And the [answer] was back home in Greece, I felt that there's a better quality of life there for me and my family. Sure, there's more business opportunities probably in America — I realize that — so I never close the door. Maybe someday I will find my way back there. But for now, I enjoy living in Greece."

Pressed about which place, other than Greece, he would like to spend the rest of his life in, Gus said: "If I would go to another place, I'd probably go somewhere warm and maybe somewhere in America. Probably somewhere in California. I like the climate out there and I have a lot of friends out there, so maybe, yeah, that's where I would [go]."

Asked how he handles being on tour all the time, Gus said: "Of course, traveling all the time with a suitcase in hand and checking into a different hotel every day, it can become tiring sometimes. But I actually love traveling. I love this type of lifestyle. Of course, I love being at home, but this is what I've been doing since I was in my early 20s, so I really cannot imagine myself doing anything else, and I really cannot imagine myself not being out there and playing for the fans. So, this is it."