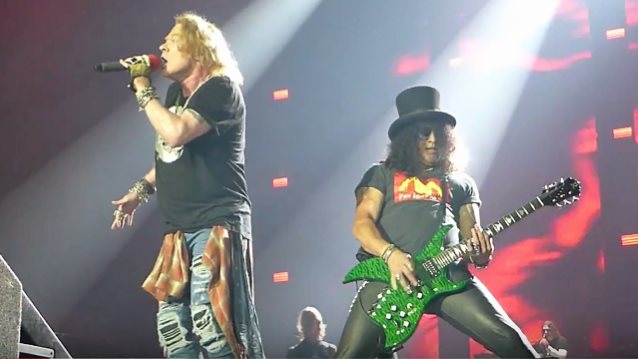 GUNS N' ROSES' classic song "Welcome To The Jungle" is featured in a new trailer for the upcoming video game "Call Of Duty: Infinite Warfare".

The two-minute clip can be viewed below. It also features celebrity swimmer Michael Phelps and comedian Danny McBride.

"Call Of Duty: Infinite Warfare" will be released for PS4 and Xbox One on November 4.

Matthew Curry, group creative director at 72andSunny, which created the ad, told AdWeek: "Classic rock has a timeless cool to it. It fits perfectly with the badass fun and swagger of the 'Call Of Duty' brand. For this particular spot … we considered everything from end-of-the-world songs to songs about escape. In the end, 'Welcome To The Jungle' had the perfect tone and message to tee up the badass fun of battling through the chaos of space."

GUNS N' ROSES launched a partial reunion of its classic lineup earlier this year, with frontman Axl Rose and guitarist Slash playing together for the first time in more than twenty years. Bassist Duff McKagan, who played several full shows with GUNS N' ROSES in 2014 prior to his official return to the band, is also involved.

GUNS N' ROSES will launch the South American leg of the "Not In This Lifetime" tour tonight (Thursday, October 27) in Lima, Peru.