GUNS N' ROSES is the first act to be announced for the return of Louder Than Life. This year, the festival will be headed to its new home at the Highland Festival Grounds At KY Expo Center on Friday, September 27, Saturday, September 28 and Sunday, September 29.

This will mark the debut of the GUNS N' ROSES lineup at the Louder Than Life festival and is the first appearance for the rock giants since performing in Hawaii in December 2018.

"There are only a handful of bands through the years whose music not only resonates with fans, but changes the entire face of rock 'n' roll. GUNS N' ROSES is one of those true icons," says festival producer Danny Wimmer. "Every year we want to come back bigger and better, and we can't wait to welcome Axl, Slash, Duff and the rest of GN'R to the Louder Than Life stage."

The full Louder Than Life lineup will be announced on Monday, April 8, the same day as tickets go on sale at 9:00 a.m. ET.

According to Pollstar, "Not In This Lifetime" topped $82 million in sales during 2018 alone, having grossed an average of $3.7 million per show over the course of the 24-date run. 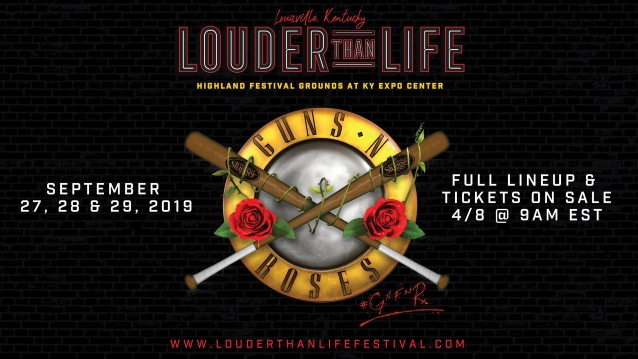