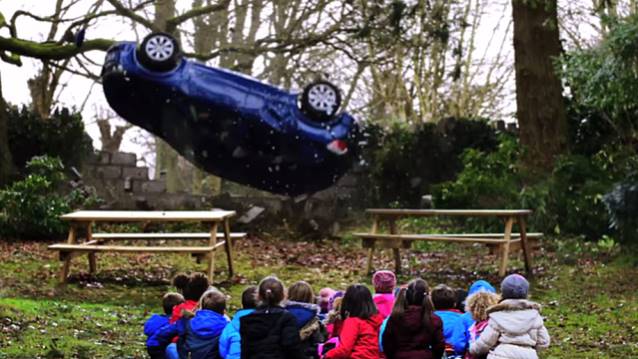 A melancholic acoustic cover version of the GUNS N' ROSES classic "Sweet Child O' Mine" is featured in a road safety ad in which a man speeding along a country road is seen flipping his car and squashing an entire picnic-load of children.

The commercial, which was created by Northern Ireland's DOE Road Safety, is designed to demonstrate how 28 children — roughly the equivalent to a primary school class — have died in accident caused by speeding cars since 2000.

"Since 2000, speeding has killed a classroom of our children," says the ad's narrator. "Shame on you. You can never control the consequences if you speed."

According to Independent.ie, the commercial — which has already been viewed more than two million times since June 17 — has been banned from airing on TV before 9 p.m. due to its brutality.

"The aim of this campaign is to challenge and dispel, once and for all, through this emotional and uncomfortable message, the false perceptions that many road users have as to the truly horrifying consequences of speeding," said Road Safety minister Mark Durkan.

Assistant Chief Constable Stephen Martin, of the Police Service of Northern Ireland, added: "This advertisement depicts very clearly and very starkly the risks involved when speed is a factor.

"Most of you will find it shocking but the reality is drivers need to be fully aware of the potential consequences of their actions."