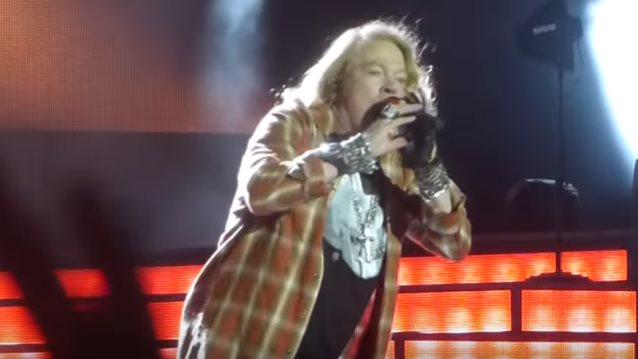 GUNS N' ROSES played the second show of its "Not In This Lifetime" North American stadium tour on Sunday night (June 26) at FedexField — home of the Washington Redskins — in Landover, Maryland near Washington, D.C.

As was the case at the tour kickoff show three days in Detroit, GN'R members Rose, Slash (guitar) and Duff McKagan (bass) plus four side musicians played for more than two hours and delivered a hit-laden set that included "Welcome To The Jungle", "Sweet Child O' Mine" and "Paradise City" from the band's classic debut album, "Appetite For Destruction". The group also played a couple of tracks from GN'R's 2008 album "Chinese Democracy", including that album's single "Better" and the fragile ballad "This I Love".

Rose was no longer confined to the chair he had been using onstage ever since breaking his foot during a surprise GUNS club show in April 1 in Los Angeles that marked the official launch of the band's semi-reunion.

The FedexField show was the band's second since an initial spate of seven gigs in April, which included two concerts apiece in Las Vegas, at California's Coachella festival and in Mexico City in addition to the Los Angeles club show.