A 30-second promotional video for GUNS N' ROSES' upcoming second Las Vegas residency, "No Trickery! An Evening Of Destruction", can be seen below.

"No Trickery! An Evening Of Destruction" will be held at The Joint at Hard Rock Hotel & Casino from May 21 through June 7.

GUNS N' ROSES' first Vegas residency, Appetite For Democracy, took place in the fall of 2012 and saw the band performing an electrifying show featuring a setlist created exclusively for The Joint.

"If some is good, more is better!" Bobby Reynolds, vice president of booking for AEG Live Las Vegas, told USA Today. "That's our take on welcoming back GUNS N' ROSES to The Joint.

"Our first residency with GN'R was fantastic in every way imaginable. The band and the fans loved the venue, and the business was great for everyone else involved. We want all of the GUNS N' ROSES fans across the globe to come see what one of the iconic rock 'n' roll bands can do when they have the best venue in the world to do it in, in a city made to party. We are gearing up for another epic residency."

Chas Smith, vice president of entertainment for Hard Rock Hotel & Casino, added: "We are really looking forward to having one of the true American rock 'n' roll bands back and performing at The Joint. Every time we have GUNS N' ROSES play in The Joint, it just keeps getting better.

"What more can I say than it's a great honor to have one of the most iconic rock 'n' roll bands in the world coming back to rock The Joint for nine more shows! We are all excited about this next run."

To buy tickets, visit the Hard Rock Hotel box office or charge by phone at 888-9-AXS-TIX.

GUNS N' ROSES drew criticism in November 2012 from Clark County commissioners after they were told about an ad for the group's Vegas concerts which depicts what appears to be a sexually assaulted woman beneath the "Welcome to Las Vegas" sign.

The image, which was said to be a watered-down version of the banned cover for the band's classic 1987 debut, "Appetite For Destruction", was being used in mainstream advertising, including newspaper promotions and taxicab placards.

The following are some of the first GUNS N' ROSES attendances/grosses at the Hard Rock Hotel & Casino, as reported by Billboard magazine: 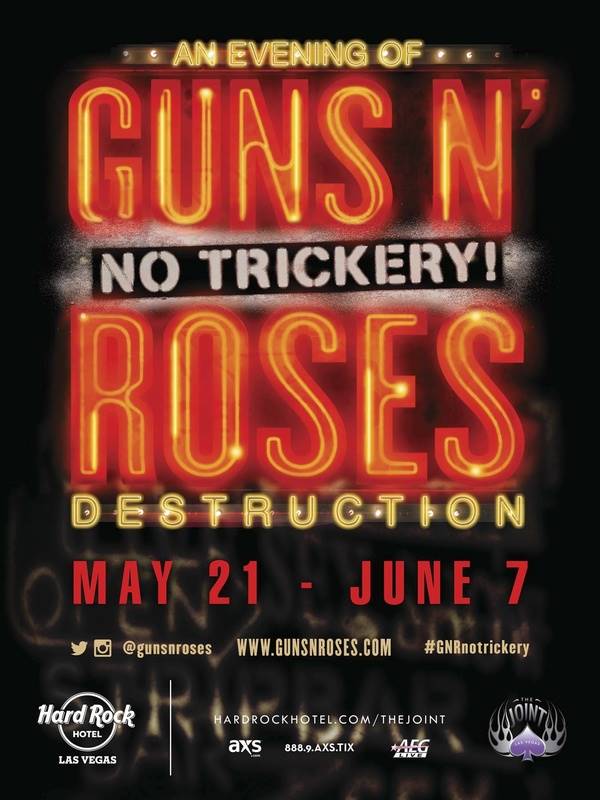