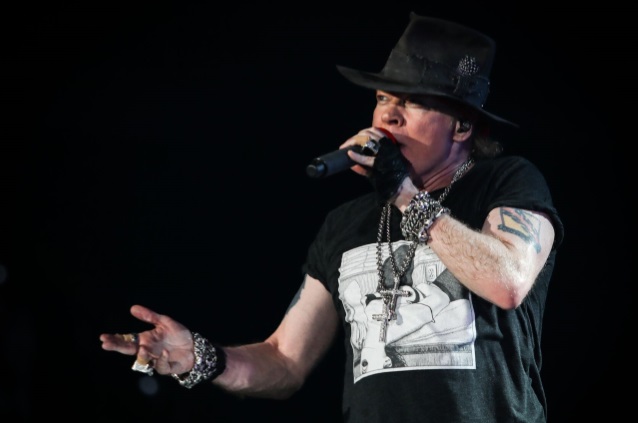 GUNS N' ROSES paid tribute to AC/DC's Malcolm Young during a concert in California, dedicating covers of "Knockin' On Heaven's Door" and "Whole Lotta Rosie" to the iconic guitarist who died this weekend.

Singer Axl Rose introduced the Bob Dylan classic by telling the audience last night at Golden 1 Center in Sacramento: "We're gonna dedicate this to Mr. Malcolm Young, who will be sorely missed by none more than his brother Angus."

GUNS N' ROSES followed up "Knockin' On Heaven's Door" with a version of the AC/DC classic that has been a regular part of GN'R concerts for the past few months.

Malcolm's brother, fellow AC/DC legend Angus Young, joined GUNS N' ROSES on stage several times during the "Not In This Lifetime" tour, including at the Coachella festival in April 2016.

Malcolm Young died on Saturday (November 18) surrounded by family after a long battle with dementia.

He was replaced in AC/DC by Stevie Young, nephew of Malcolm and Angus Young.

Axl Rose did a string of European and North American concerts with AC/DC in 2016, mostly to fan and critical acclaim.

This goes out to Malcolm Young.
He will be sorely missed.