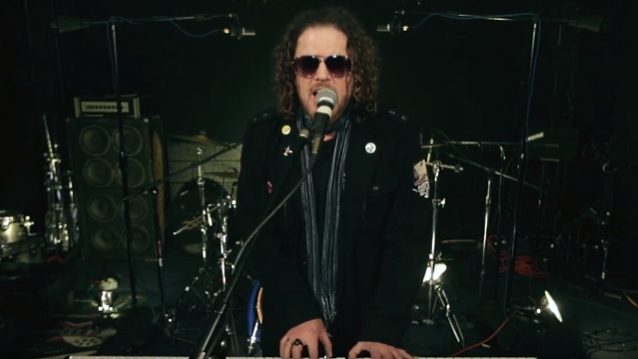 GUNS N' ROSES keyboardist Dizzy Reed has released an animated music video for the song "Forgotten Cases". The track is taken from his debut solo album, "Rock 'N Roll Ain't Easy", which was released in February 2018 via Golden Robot Records.

Asked about the inspiration for the "Rock 'N Roll Ain't Easy" title track, Dizzy told Germany's Metal-Heads.de: "I spend a lot of time reminding myself that life could be a lot harder. I could be doing something I don't wanna do at all. I'm really lucky to be able to play rock music for a living.

"It's not as easy as it looks. It's not all glitz and glam," he continued.

"I started playing rock and roll because I didn't wanna work; I didn't wanna have a 9-to-5 [job]. And I realized at some point… Now all I do is work. If you wanna stay busy out there and [remain] relevant, you have to work harder.

"There's a lot of times when, especially at that point in my life, where I was wondering why I was doing it still, and there was nothing coming in, and you don't have anything to fall back on. If I went to a McDonald's right now to apply for a job, they wouldn't take me. What am I gonna do?

"It's a story about how difficult things were and how much time I had to spend sticking it out, wondering where I was gonna go to sleep that night, wondering where I was gonna get a shower and get something to eat," he added. "I mean, that went on for years. And I think when I did write that song, I thought I had kind of come full circle. My first marriage had split up and my stuff was literally in my truck. I was staying in an apartment with the girl who had become my wife now. And I was sitting out on a balcony playing guitar, and that song just started coming [to me]. It was raining and I didn't know what I was gonna do. But a lot of it is kind of tongue-in-cheek too. If you know me, I'm not that serious. But I think people will get the point. People can make of it what they would like, basically."

In 2012, Dizzy was inducted into the the Rock And Roll Hall Of Fame as a member of GUNS N' ROSES. He has toured with the PSYCHEDELIC FURS and has toured, recorded and written with supergroup THE DEAD DAISIES whose lineup has featured members of THE CULT, MÖTLEY CRÜE, WHITESNAKE, THE ROLLING STONES and THIN LIZZY. He also sings lead vocals with his side project HOOKERS & BLOW.