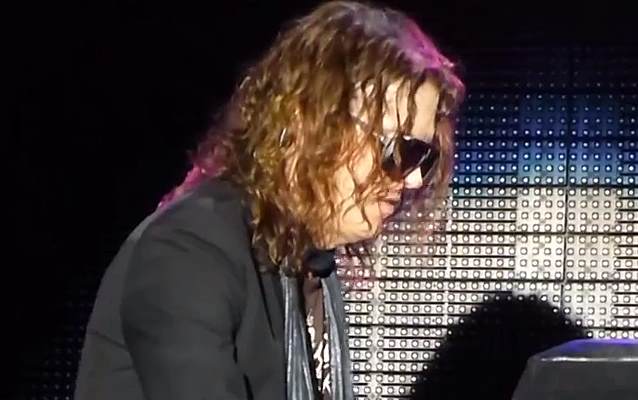 SROmaginc.com recently conducted an interview with GUNS N' ROSES keyboardist Dizzy Reed. You can now listen to the chat in the YouTube clip below.

Asked what was the most difficult thing about jumping into a band like GUNS N' ROSES that was already so enormously popular, Dizzy told GlideMagazine.com: "The most difficult thing was just trying to gain acceptance. First, by the band, because Axl [Rose, vocals] really wanted me in the band and he said that was the way it was going to be. You know, we had been talking about it for a few years before that, before they became big, actually, and I think the other guys weren't really as keen on the idea of having a sixth guy in the band. When I joined, it was still all five original guys. But I think over time they started to realize that I could contribute to the music and I wasn't that bad of a guy to be around. [Laughs] And they realized I wasn't going anywhere, basically, and so slowly I started gaining acceptance by them. But then it took a long time for a lot of the fans to really accept the fact that I was in the band. Quite a few years, actually. But now it's been twenty-three years and I'm still in the band."

Regarding whether he regretted the fact that he didn't go to GUNS N' ROSES' Rock And Roll Hall Of Fame induction ceremony, Dizzy said: "No, I don't regret it. You know, myself and Axl and Izzy [Stradlin, guitar], we made a decision. There's still some things I don't understand about it. There was opposition regarding a performance and having the current lineup perform, which to me was just ridiculous because Tommy Stinson has been in the band for, like, sixteen years. And Richard Fortus has been in the band for twelve years. Basically, most of those guys have been a member of GUNS N' ROSES longer than the guys who were there. So that didn't make any sense to me. I didn't understand who was behind that or why that had to be like that. But I want to say this: Being accepted into the Hall Of Fame and being told I was going to be accepted into the Hall Of Fame, I'm very honored to have my name mentioned along with all the other artists that are in the Hall Of Fame and I don't take that for granted. And personally, I don't think I'm worthy. But it was an honor to be told that. But then again, the lineup issues and that we could each only bring one guest. If there are any other guests, I'd have to pay full price for tickets and it's not cheap. So it was like, well, I can take my mom but not my dad. I could take my wife but not my son. I could take one of my kids. I could take my brother but not my best friend. I don't know, I'm scratching my head: Where does that money go? [Laughs] Does Rod Stewart or Meat Loaf have that problem? So yeah, there were just some things that I didn't quite understand that couldn't be answered, so I had good reason to do what I did. It is what it is and I don't regret it."

Asked what his strongest memories are of the time when GUNS N' ROSES released "Use Your Illusion I" and "Use Your Illusion II" simultaneously in 1991 and they became the biggest rock band on the planet, Reed told The Maitland Mercury: "It was definitely a pinch-myself-every-once-in-a-while situation to see if I was dreaming. But it I had known them before they even got signed and Axl [Rose, GUNS N' ROSES lead singer] had talked about having me in the band from very early on and then to watch them become so gigantic, I was always wondering if it was really going to happen. But he's a man of his word and when they were ready to start tracking those songs and those albums he called me and I got a phone call a couple of days later from Del James who was putting together the press release and said, 'Congratulations, you're in GUNS N' ROSES.' When I joined the band, they were chartering this jet that we used to fly around on everywhere for those three years. So I toured with a major band for three years and one day I was sitting around with some of the guys in the crew and they were all telling bus stories — stories about things that happened on the [tour] bus. It got to me and they said, 'C'mon, Dizzy, what are some of your bus stories?' and I said, 'I've never been on a bus.' But, you know what? I've been on a shitload of buses since then. I prefer it these days — I like being on the bus and rolling down the highway."