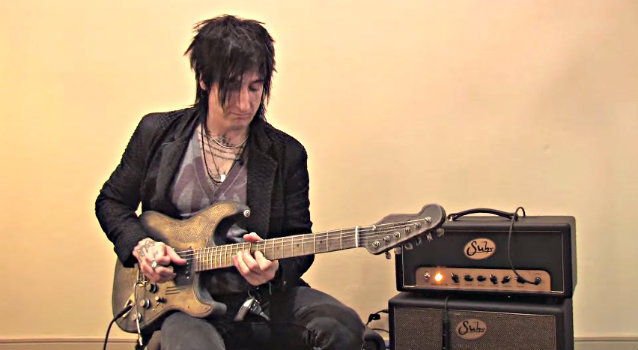 In a brand new interview with HardrockHaven.net, GUNS N' ROSES guitarist Richard Fortus was asked what the highlight was of playing in Las Vegas in 2012 during the "Appetite For Democracy" tour in celebration of twenty-five years of "Appetite For Destruction" and four years of "Chinese Democracy".

"Well, that was the first time we did a residency in Vegas," he said. "The last time we just finished up a month and a half ago."

He continued: "It's fun. It is a different experience. It is fun to get to really build a show like that. You don't have to tear it down every night. You can do things that you would normally do every day in your set. It also gives you a chance to stretch out a bit. In case we get bored? We can change things up. Especially Axl [Rose, GUNS N' ROSES singer], he doesn't like anybody to be too comfortable."

After the HardrockHaven.net writer told Fortus that he likes the current version of GUNS N' ROSES "better in a way" than the classic GN'R lineup, Fortus replied, "That is cool. I know some people do and some people don't. But it is a really a fun band to play with."

GUNS N' ROSES lead singer Axl Rose hinted in a rare new interview with Revolver magazine that a follow-up to the 2008 album "Chinese Democracy" could be in the works. Rose explained, "We recorded a lot of things before 'Chinese' was out. We've worked more on some of those things and we've written a few new things. But basically, we have what I call kind of the second half of 'Chinese'. That's already recorded. And then we have a remix album made of the songs from 'Chinese'. That's been done for a while, too."