GUNS N' ROSES guitarist Ron "Bumblefoot" Thal recently laid down guest bass on the debut album from the New York-based band SOLIS REX. The group, which features in its ranks Carlo Tonalezzi (one of the founding members of the first-ever Brazilian metal act CERBERO) and Veronica Bellino (who has worked with CARMINE APPICE'S SLAMM), is currently unsigned.

Regarding how Thal's involvement came about, SOLIS REX states, "In the strangest development in the recording process of the new SOLIS REX recording, the original plans to include a new bass player fell through as the tracks were finally taking shape. With the record running at top speed, the need for a new bassist was apparent but the difficult period of auditioning random players would certainly not pass under these circumstances Aerik [Von, vocals] extended an e-mail to his friend Ron Thal (currently playing lead guitar with GUNS N' ROSES and his own band BUMBLEFOOT) looking for a possible suggestion of someone who could fill in the slack at such short notice. Ron, instead of suggesting anyone else, offered to save the day and eventually ended up tracking all of the bass recordings himself on the final album. Ron not only saved the band from a different tracking-time transition, he set a standard that will shape the bass slot for each musician to follow him, one that elevated the recording beyond it's original expectations. That, and he was the only person who could function in a studio setting on the mental meltdown level that Mr. Von functions." 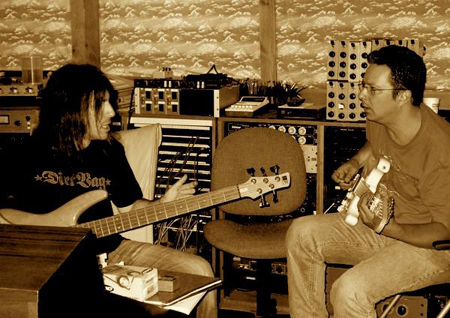