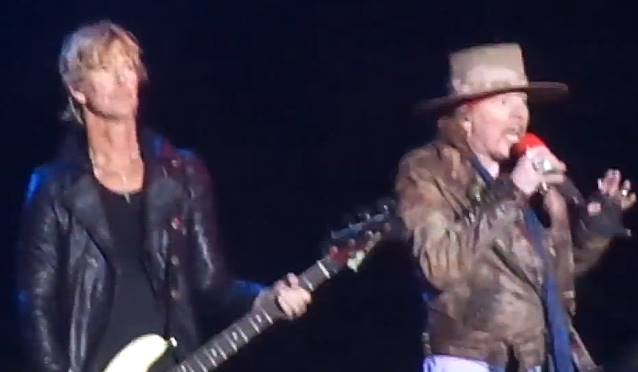 A Bolivian TV report on GUNS N' ROSES' April 12 concert in La Paz, Bolivia — including an interview with the band's guitarist Ron "Bumblefoot" Thal — can be seen below.

As previously reported, Slash recently said that he was not concerned about Duff McKagan's reunion with Axl Rose at five GUNS N' ROSES shows in South America this month. McKagan joined the band to fill in for bassist Tommy Stinson, who was committed to two reunion shows at the Coachella festival with THE REPLACEMENTS. Slash told TeamRock, "What Duff does is what Duff does. It doesn't really concern me. Duff's relationship with Axl is different to mine. That call to me is just not going to happen."

Slash added that he bears no ill will toward McKagan for doing the shows, saying, "I don't judge Duff. He's cool. He just has a way more amicable, neutral relationship with Axl than I do."

Slash told The Pulse Of Radio a while back how his relationship with Rose disintegrated during the final years of the original GUNS lineup. "His sort of m.o., as far as the band was concerned, over time got so exaggerated in the rock star sense or whatever and he became such a dictator and this and that and the other, that it was impossible for me to work with him, because I'm not the kind of person that takes orders, you know," he said.

McKagan joined GUNS 'N ROSES onstage for the first time in 17 years at an October 2010 concert in London. He also performed with the current version of GUNS in December 2011 at shows in Vancouver and Seattle. All three appearances were for a few songs, not full gigs.

The South American shows mark the first time he has played full concerts with the band since his departure in 1994.

Rose told Billboard.com in 2009 that he doesn't ever expect to play with Slash again, saying, "One of the two of us will die before a reunion. However sad, ugly or unfortunate anyone views it, it is how it is."