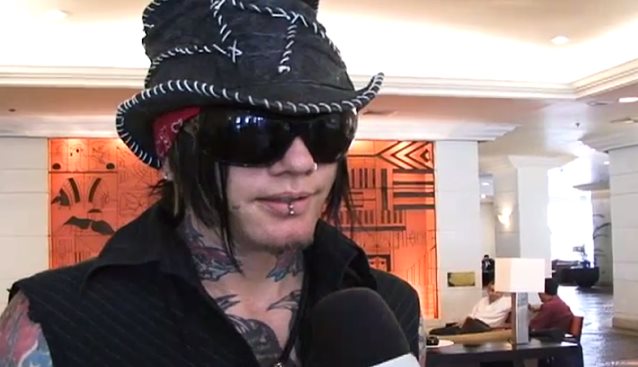 GUNS N' ROSES guitarist Daren Jay "DJ" Ashba has confirmed that the band will return to Las Vegas this spring for its second residency at the Hard Rock Hotel & Casino.

The news was originally revealed earlier this month via an image posted on the venue's Facebook page, featuring the band's logo along with the following words: "coming spring 2014" and "Text GNR to 97580 to be the first to hear the big news."

There has been no official announcement regarding GUNS N' ROSES' return to the Hard Rock Hotel & Casino.

GUNS N' ROSES' first Vegas residency, Appetite For Democracy, took place in the fall of 2012 and saw the band performing an electrifying show featuring a setlist created exclusively for The Joint. Appetite For Democracy spanned the band's biggest hits from their debut album "Appetite For Destruction" (1987) through their platinum-selling record "Chinese Democracy" (2008). The concerts featured the current lineup of the band, of which singer Axl Rose is the only original member.

Ashba also spoke about the incident last October when his marriage proposal to his girlfriend resulted in an unhappy ending for three Las Vegas police officers. Before Ashba asked for Nathalia Henao's hand in marriage one night last August, he arranged for a special helicopter flight over Las Vegas — apparently going through some friends in the department to obtain the use of a police helicopter.

But the flight prompted an investigation into the possible misuse of the helicopter, and has resulted in one police captain losing his job.

"They act as if we jumped a fence and stole a helicopter late at night, and that's not even what happened," Ashba told "More Access".

"I'd taken a helicopter ride a year before, posted a 'Thank You' on my Instagram — not a peep," he continued. "They offered up a ride again, and I said, 'Sure, that'd be great. It's a big day for me.'"

Ashba says what's been reported in the media is not an accurate depiction of that evening.

"There is a lot of false information that was fed to the public. We followed protocol. It was an approved ride."

Ashba himself may have sparked the investigation by writing on Instagram after the flight, "That was the most incredible day of our life!! Special thx to the Las Vegas Police Dept. for the most amazing helicopter private tour over Vegas!"

He added that the helicopter landed "in a field at Police headquarters," where he had a table set up with roses and champagne.

The Police Department looked into the issue shortly after Ashba posted his message and handed down its verdict just before the New Year holiday.

Captain David O'Leary was ordered demoted to lieutenant but retired instead and was said to be "basically forced out."